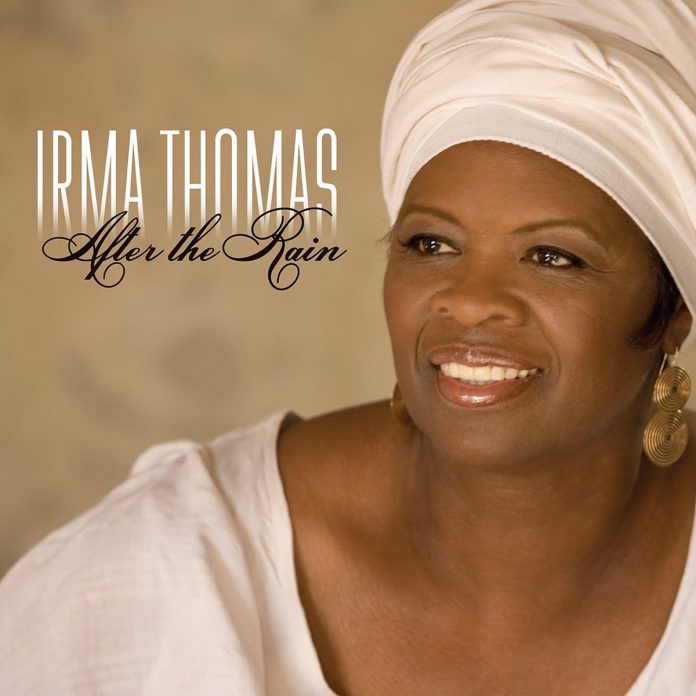 The two LPs here are reproduced with the original packaging and artwork of the first issue on Rounder Records. Recorded a few months after the catastrophic Hurricane Katrina in New Orleans, Irma Thomas was touring in Texas when it happened and when she returned found she had lost all her possessions. “I put Katrina behind me the minute I saw my house”, she said at the time. “I came up when black folks didn’t have time to be depressed.”

She certainly sounded bright and buoyant a couple of months later recording these songs which, we are informed on the liner, were chosen before the hurricane hit New Orleans. Irma’s rich voice cuts through In The Middle Of It All with clear diction and phrasing as Sonny Landreth provides a lively solo on slide guitar. He is there again on the more sombre Flowers as Irma’s voice takes on a more reflective sound.

Known as the Soul Queen of New Orleans, she was trained and came up in blues and gospel music, both genres well represented on this two-record collection. In fact, this album won the Emmy for best blues record in 2006 although much of the material has an R& B or strong gospel flavour. Two of the best tracks are Make Me A Pallet On Your Floor where her folk roots shine through and I Wish I Knew How, for a blues and gospel injection.

She is in good voice too on I Count The Tears and the slow, traditional Another Man Done Gone. Soul Of A Man works well with backing from just acoustic guitar, percussion and, would you believe, fretless banjo? David Torkanowsky is a tower of strength all through on piano, electric piano and occasionally Hammond B3. Singleton and Moore are consistently supportive throughout too on acoustic bass and drums.

Irma exercises her blues chops to good effect on Blind Willie Johnson’s Soul Of A Man, with sparse but telling accompaniment from Corey Harris on acoustic guitar, Dirk Powell on fretless banjo and Moore’s percussion. The album ends with a warm reading of Stevie Wonder’s Shelter In The Rain with emotive but controlled singing and just Torkanowsky’s solid piano chords.

Discography
LP1: In The Middle Of It All; Flowers; I Count The Tears; Make Me A Pallet On Your Floor; I Wish I Knew How It Would Feel To Be Free; If You Knew How Much; Another Man Done Gone
LP 2: Till I Can’t Take It Anymore; These Honey Dos; Another Lonely Heart; Soul Of A Man; Stone Survivor; Shelter In The Rain (66.12)
Thomas (v); Dirk Powell (vn, bjo, elg); Sonny Landreth (elg, slide g); James Singleton (b); Stanton Moore (d); David Torkanowsky (p, org); Corey Harris (elg,g); David Egan (p); Scott Billington (pc). New Orleans, December 2005-February 2006.
Craft CR00280