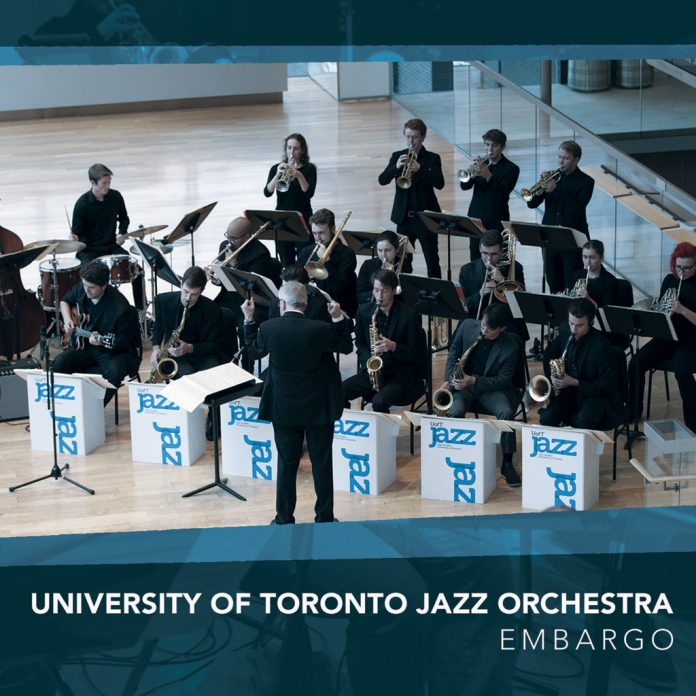 Soon after the end of World War II, college and university jazz courses and orchestras began to flourish in North America. The best-known example is probably North Texas State University with its music department’s jazz curriculum and the University One O’Clock Lab Band, which made many notable albums including With Respect To Stan [Kenton] (1986) and North Texas Jazz: 50 Years (2004).

More recently, the University of Toronto Jazz Orchestra has begun to make its mark. In 2017 it backed Norma Winstone and Dave Liebman on the CD Sweet Ruby Suite: The Music Of Kenny Wheeler. Embargo is its first release as a 19-piece aggregation led by Gordon Foote, a professor of jazz studies at McGill. The music, apart from an arrangement of Take The ‘A’ Train by the late Rob McConnell – leader of The Boss Brass – was composed and arranged by students in the music faculty, some of whom are members of this orchestra. The results are generally satisfying but uneven.

The opener, an airy and dancing ‘A’ Train, is also the best track, with the sections and soloists performing McConnell’s chart with gusto. Trombonist Nick Adema and baritone saxophonist Alex Manoukas contribute well-crafted solos, while the trumpets punch out the familiar phrases. Medium Blue is a medium-tempo swinger, with the haunting theme played by Geoff Claridge on clarinet, followed by Zach Griffin on alto. A faster Over My Head has more complex scoring, several succinct drum breaks by Jacob Slous, a plangent bass solo by Evan Gratham and lyrical clarinet by Geoff Claridge. His composition Apollo is a moody piece, scored for trombones, French horns, muted trumpets and guitar. Overlong, it is still an arresting item. Summer’s Over, a delicate piece, has confident solos from Jacob Chung on tenor and Charlotte McAffee-Brunner on trombone. Undiagnosed begins slowly, but then picks up speed, highlighted by not always easy-on-the-ear chase choruses from trumpeter Kaelin Murphy and altoist Griffin. The penultimate track, Hi Fly, a gently romping feature for the entire sax section, also has a jaunty solo by pianist D’Alessandro, a stop-time trumpet interjection by Christian Antonacci and a short but sweet contribution from altoist Griff Vona. Ironically, the title track, Embargo (by Vonne Aguda) is the least satisfying. Julien Bradley-Combs mars the proceedings with an over-recorded, monotonous and hard rock-derived guitar solo. But if not (yet) up to NTSU standards, the UTJO displays embryonic talent, enthusiasm and promise.

Peter Gamble - 08 August 2019
The extended title of this CD reads “60th Birthday Celebration: New Takes On Tunes From ’59”; subsequently we are treated to 11 selections taken from recordings made during Alan...