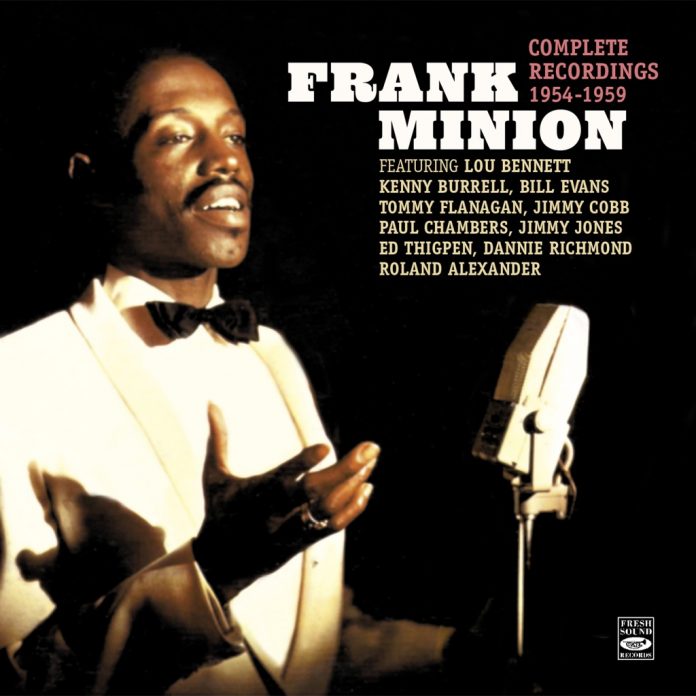 Another issue from Jordi Pujol’s impressive Fresh Sounds label, this time the little-known singer Frank Minion, who played the New York clubs, including Birdland, in the 1950s. His first recordings, for Apollo, were with Lou Bennett’s Trio, and his delivery is very much in the bebop style of the time. Like Babs Gonzales, his ad-libbing is inventive, often surreal; a machine-gun blur of words without losing any accuracy of diction.

He occasionally cut sides to appeal to a wider audience: Please Send Her Back To Me has doo-wop vocals, velvety tenor sax and guttural baritone, whilst How Much Land is a socio-political comment.

Minion’s skills lie in the way he fits the words into the music – vocal acrobatics but retaining a feel for the originals, despite taking certain liberties – often humorously, as on Cole Porter’s Night & Day. He avoids the Betty Roche scat approach on Take The A Train whilst keeping it as an expression of bebop. Night In Tunisia follows its exoticism, but is given the treatment with flattened notes and Minion’s command of rapid vocal delivery.

The eight tracks with pianist Jimmy Jones are a delight and contain some excellent support from the quartet. I’ve Done My Share in particular has a marvellous solo from Jones and great contributions from Kenny Burrell and Joe Benjamin. Another highlight is the way the three Miles Davis covers are done, showing Minion’s feel for the material, his ballad style and his empathy with the musicians. In return, Bill Evans plays with astonishing lyricism – his solo on So What, slightly uptempo, stands out, whilst the vocals follow the instrumentation.

More first-rate support comes from the backing group on the suite Black Opium Street, a comment on the music, life and scene of urban America. Mixing songs with narration, no doubt a legacy of his time at drama school, Minion has the benefit of sympathetic interjections from Roland Alexander’s tenor and flute and Tommy Flanagan’s piano.

The album ends with a return to some more commercially orientated tracks, including a then-fashionable mambo, but the strength lies in the jazz tracks – inventive and varied with excellent back-up musicians. Extremely enjoyable.

Derek Ansell - 08 March 2019
Just to prove how durable and timeless jazz is, the Fishwick/Garnett unit have produced an LP with contemporary flavours but essentially it is the much-loved hard bop that flourished...