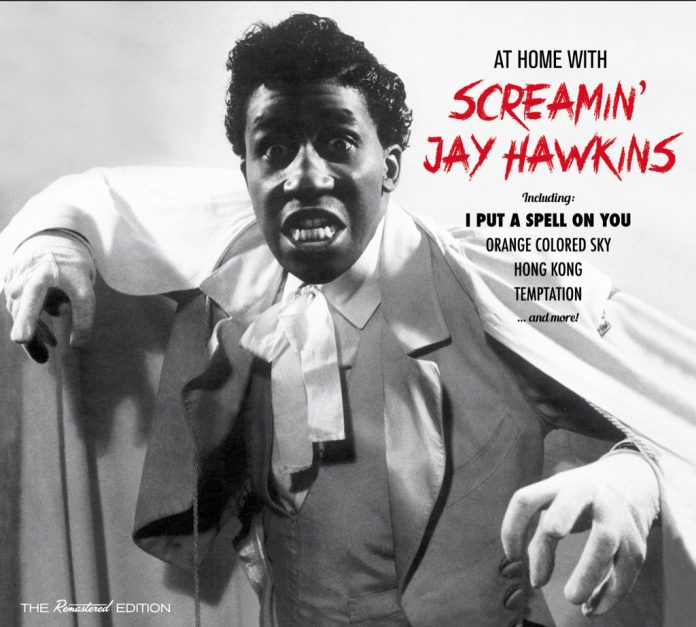 If anyone needs an example of the frenetic, exuberant, eccentric energy that characterised the best of early rock and roll they can be directed to Little Richard, or Jerry Lee Lewis, but for the finest two and a half minutes it might be best to turn up the volume on Screamin’ Jay Hawkins’s I Put A Spell On You. It’s the opening track on his 1958 album, At Home With Screamin’ Jay Hawkins, which has been remastered and re-released on Hoodoo Records. In fact, the album’s 12 tracks form less than half of this welcome package, the remainder being bonus tracks from a variety of recording sessions and lineups.

Hawkins – a champion amateur boxer before turning to the stage – is blessed with one of the most powerful voices in rock and roll, capable of singing ballads, blues and hard-rocking dancefloor fillers. Ballads are rare here. Hawkins seems to tire of the need for control and soon returns to his favoured screams, shouts and bluesy swagger – with wilder songs like Alligator Wine and Frenzy taking things even further.

It’s fair to say that Hawkins has his own distinctive way with the American Songbook. Temptation is over-the-top melodrama, I Love Paris gets the full-on backing vocals and accordion treatment before Hawkins suddenly diverts to Germany (“Achtung”, he gleefully cries), Kenya (“I saw Mau Mau kissing Santa Claus”, not one of Cole Porter’s lyrics as far as I remember) and China. Hawkins’s “Chinese” accent on I Love Paris (yes, really) and Hong Kong is of its time (to put it mildly) and sits uncomfortably with current expectations.

Apart from the ever-popular I Put A Spell On You (and the not-dissimilar There’s Something Wrong With You), Hawkins is at his most enjoyable on the upbeat blues of songs like Yellow Coat – the band excels at playing these numbers and sounds like it’s having as much fun as the frontman. Over 27 tracks Hawkins’s over-the-top vocal stylings start to feel rather repetitive, but there’s no denying that a quick blast of Hawkins and his band can bring a smile to the face and a tap to the feet.

Discography
I Put A Spell On You; Orange Colored Sky; Hong Kong; Temptation; I Love Paris; Swing Low, Sweet Chariot; Yellow Coat; Ol’ Man River; If You Are But A Dream; Take Me Back To My Boots And Saddle; Deep Purple; You Made Me Love You (I Didn’t Want To Do It); Person To Person; Little Demon; Alligator Wine; Frenzy; There’s Something Wrong With You; You Ain’t Foolin’ Me; Darling Please Forgive Me; Please Try To Understand; Not Anymore; Ashes; The Past; Armpit #6; I Hear Voices; Nitty Gritty; Just Don’t Care (70.37)
Hawkins (v); Sam “The Man” Taylor, “Big” Al Sears (ts); Mickey Baker (elg); Kenny Burrell (elg); Sir Charles Thompson (p); “Specs” Powell (d) and others. New York, various dates between 1953 and 1962.
Hoodoo Records 670091

Jim Robitaille Group: A View From Within