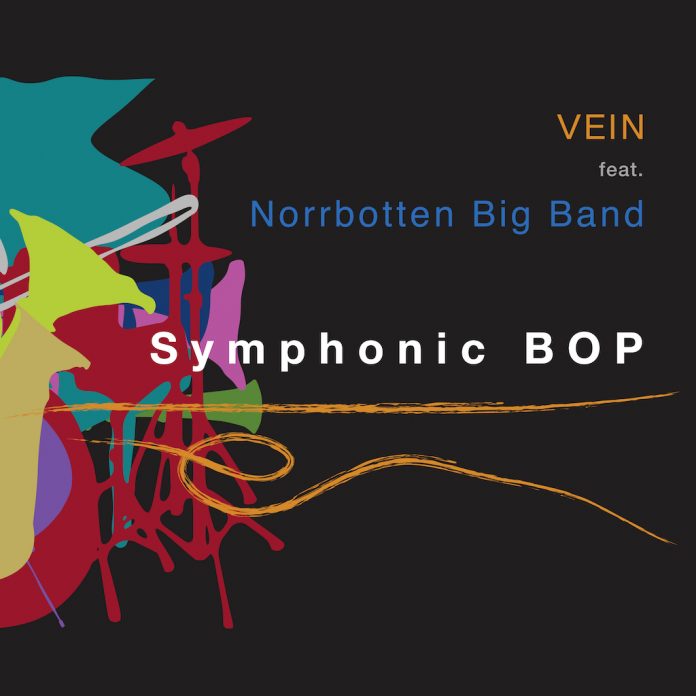 Every once in a while a record comes along which totally – totally! – confirms one’s faith in the surpassing music that is jazz (you know – the music that swings, that gets the toes tapping, the fingers clicking, the brain engaged and the face smiling, big time). Some years ago, poet Maya Angelou’s Music, Deep Rivers In My Soul was one such, its archetypal African-American poetics set to music by Wynton Marsalis and issued in 2003 by The Limited Edition Club with a suite of colour etchings by Dean Mitchell. Now here comes this absolutely classic cracker of a European/Scandinavian album from the Swiss piano trio Vein and the (chiefly) Swedish Norrbotten Big Band.

Coruscating energy and limpid reflection; grooves as deep and funky as they are cross-phrased and swinging; writing as intelligent as it is soulful, delivered through spot-on solos, fabulous voicings and quicksilver dynamics: you name it, it’s all here, in 54 or so minutes of the sort of music which might just raise the dead – or at least get them to shake a leg.

Over the years, the Norrbotten Big Band have made it their practice to team up with special soloists, drawn from both Scandinavia and America, for touring and recording. Their impressive discography stretches back to 1989 and includes recordings with the likes of Nils Landgren, Randy Brecker, Dave Liebman, Tim Hagans, Peter Erskine, Anne Mette Iversen and Lennart Åberg. A particular favourite of mine is the often reflective and shimmering Jan Allan (80), a two-CD celebration of (and with) the great Swedish trumpeter.

The only quibble I have about this release concerns its title. For me, Symphonic Bop is unfortunately redolent of the “let’s stick on some strings” approach of some early bop recordings, and the (superbly marshalled and integrated) breadth and depth of melodic, harmonic and rhythmic resource to be relished here explodes many a cliché of bop doxology. I’d have gone for Ecstasy, pure and simple. But if the title sucks a touch, the packaging is fine, with excellent cover design and all solo details given in the sturdy fold-out packaging. On no account miss this one!

John Watson - 18 February 2021
Piano master Hersch describes this as “kind of a comfort food album, with a little badass stuff in there”. Songs From Home was recorded in his home studio in Pennsylvania...