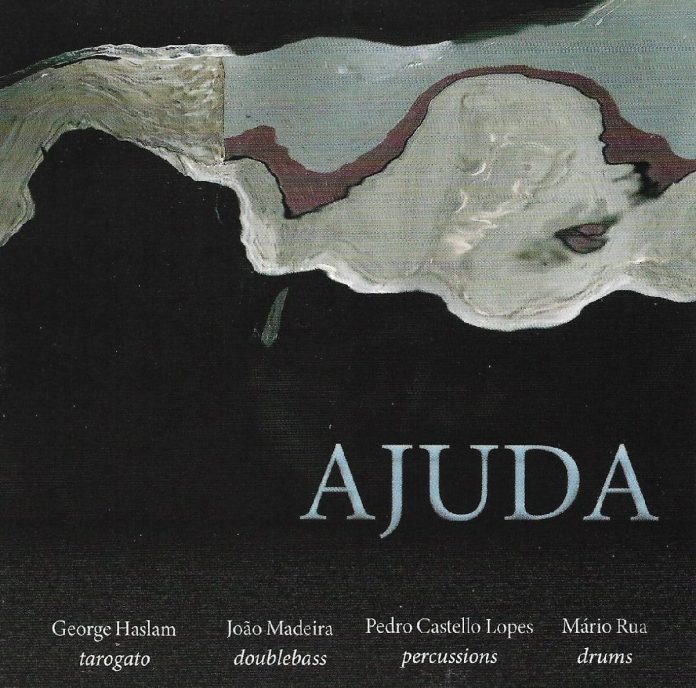 Long recognised as one of the most experienced and widely travelled musicians on what is loosely known as the free-music scene, Haslam established his estimable SLAM label in 1989 and has subsequently done a great deal to document and help develop free playing, particularly with regard to British musicians.

In 1992 he founded the British Saxophone Quartet with Paul Dunmall, Elton Dean and Simon Picard and early in the new millenium, SLAM did much to help make available the recordings of drummer Steve Harris’s genre-busting free improvising group ZAUM.

SLAM has long cast its net far beyond British shores and this latest release, featuring Haslam and a trio of excellent Portuguese free improvisers, is as good an example as any of the label’s open-minded internationalism. As Haslam explains in a short sleeve-note, Ajuda (Help) came about through the fortuitous meeting of these musicians and friends during a free day Haslam had while visiting Lisbon to work with the poet and musician Miguel Martins. All the collectively improvised music the quartet played that day is here, “warts and all”, as Haslam puts it.

The only obvious (and minor) warts I can detect are at the beginning of the title track, where Haslam takes a few seconds to get his articulation and intonation up to speed on the tárogató – the double reed, clarinet-like instrument known chiefly through the folk music of Hungary and Bulgaria – and some similarly brief moments of questionable pitch in the concluding Pleasures And Needs.

The latter scarcely matters, for there is so much to enjoy in the fluid, dynamically vivid interactive field conjured by mobile (often arco) bass, drums and percussion, with Haslam sometimes essaying a folk-like sequence of phrases, sometimes digging deep and flying high into more unclassifiable realms. Occasional vocal “little noises” add to the enjoyment and my only (unreasonable) quibble is that the nature of the occasion meant that Haslam’s potent baritone is nowhere to be heard.

George Haslam adds a footnote: “Michael is correct about the tárogató being a double reed instrument – some are but most are single reed – including mine. I do have a tárogató mouthpiece (similar to clarinet) but I use an alto sax mouthpiece, which gives a different tone.”

Simon Adams - 13 February 2020
The main focus of this new release by pianist and composer Mark Springer is Army Of Lovers, a one-act, 31-minute opera for three male voices. It is set during...