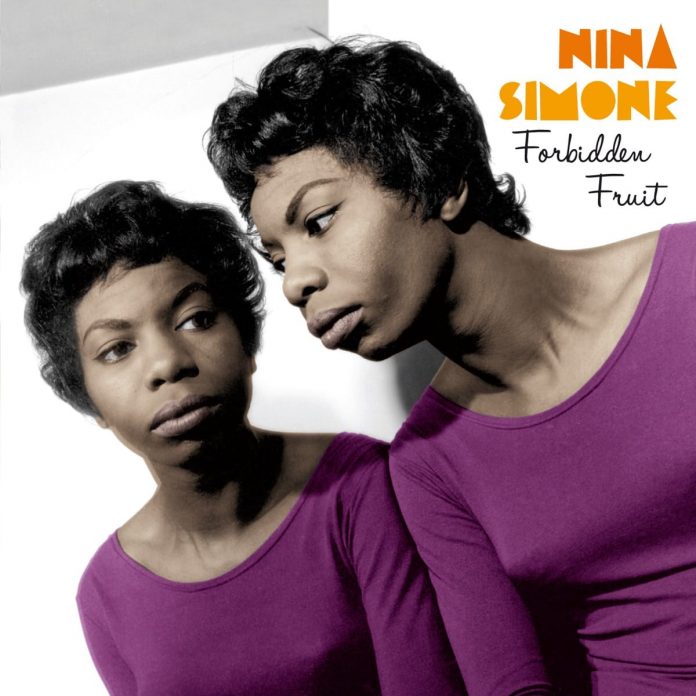 How can music originally released in 1961 appear to have even more power and resonance in 2021? The answer is in the name: Nina Simone.

In this reissue of Forbidden Fruit, (which includes the bonus album Nina Simone Sings Ellington), Simone’s delivery of the melodies appears formidable yet fragile. Simultaneously we get glimpses of her turbulent life troubled by oppression, political plights and battles with mental health. An album of songs predominantly about the highs and lows of love, it elicits the deeper emotions with ease.

The diverse styles throughout the album highlight Simone’s versatility as an artist, certainly aided by a classical training which gave her a firm musical grounding. The stormy stylistic fusion across the tracks seems to underline the disorder of her life.

Simone’s musical training is clear throughout as she accompanies her rich, commanding alto voice. It’s easy to be mesmerised by the combination. Forbidden Fruit, although released at the beginning of her career (she was 28), confidently declared a voice that would cement its position in jazz in the ensuing years.

Discography
Rags And Old Iron; No Good Man; Gin House Blues; I’ll Look Around; I Love To Love; Work Song; Where Can I Go Without You; Just Say I Love Him; Memphis In June; Forbidden Fruit; Do Nothin’ Till You Hear From Me; I Got It Bad (And That Ain’t Good); Hey, Buddy Bolden; Merry Mending; Something To Live For; You Better Know It; I Like The Sunrise; Solitude; The Gal From Joe’s; Satin Doll; It Don’t Mean A Thing (If It Ain’t Got That Swing); Love Me Or Leave Me; My Baby Just Cares For Me (78.48)
Nina Simone (v). NY, 1960-61.
20th Century Masterworks 170028