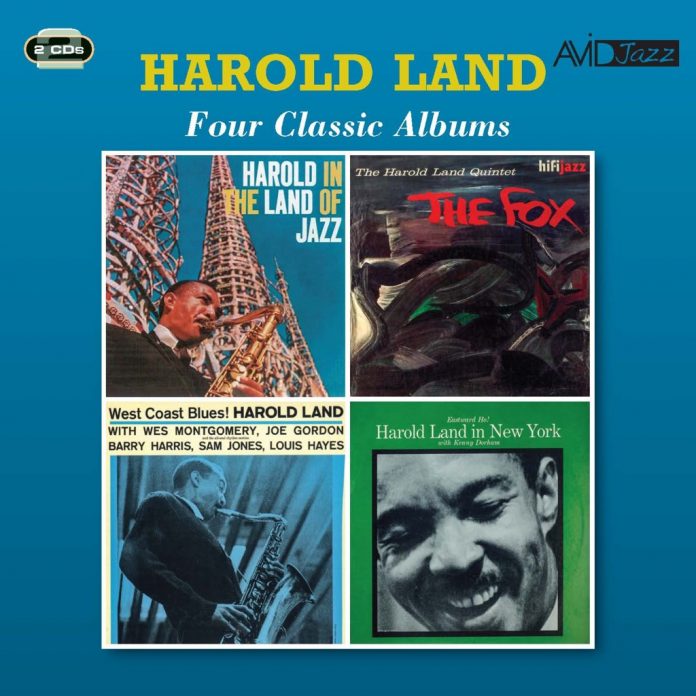 This well-chosen collection begins with the 1958 In The Land Of Jazz where Land had an ideal line up to support him. Ericson’s taut, tight solos contrast neatly with the tenor man’s more free flowing lines and all is driven forward by Hope, Vinnegar and that most sprightly of swinging drummers, Frank Butler.

Elmo Hope and Land himself contribute original compositions and round the programme off with two standards and Carl Perkins’ Grooveyard. All play well throughout the 40-odd minutes of this album with the Perkins piece a standout track. Hope’s quirky pianistics show that he was unique among keyboard players. Land excels as a ballad player on You Don’t Know. A good but unexceptional programme, this; if it was a single CD it would rate about three stars.

No such restriction on The Fox, the second album included here; this one is five all the way. From the uptempo title track, the combo swings hard through six fresh (at the time) compositions by Land and Hope between them. There is a vigorous freshness and sense of purpose from all the musicians on this date where everything went well and the solos were all top quality. Land was challenged and stimulated by the presence of Dupree Bolton, a mysterious but gifted trumpeter who appeared from nowhere and disappeared a short time after this session.

Trumpeter and tenor man spar and inspire each other to great heights of improvisation and the rhythm team of Hope, Herbie Lewis and Butler play with fire on all selections. This is one of the great sessions in jazz, all the more surprising perhaps because it was recorded in LA at a time when jazz there was laidback and soft focus. Avid have used the original artwork and notes from the first issue of Hi-Fi Records, who recorded and put this music out in 1959.

We are back in three to three and a half star territory with the third album here, West Coast Blues, where Land sails through six blues or blues-flavoured pieces along with sterling support from Joe Gordon, that bright and brassy trumpet man on the West Coast and Wes Montgomery, the musician’s jazz guitarist supreme. All combine well for a nicely structured, fast reading of Parker’s Klacktoveedsedstene. Another strong ballad reading comes with Land’s version of Don’t Explain.

Harold Land In New York, the last LP represented here, came from a trip Land made to NYC where he was lined up with trumpeter Dorham and recorded for Jazzland, a subsidiary of Riverside Records. Dorham’s naturally cool and distinctive sound is certainly a bonus on this final set of tracks. Unusual selections like Little Street In Singapore and Slowly by David Raksin make this a fascinating set of performances. The front line play well in their respective styles and the lesser-known rhythm team of Trice, Jones and Peters support well with hard drive and commitment. This one alone would be a four-star disc. Final rating reflects all four albums combined.