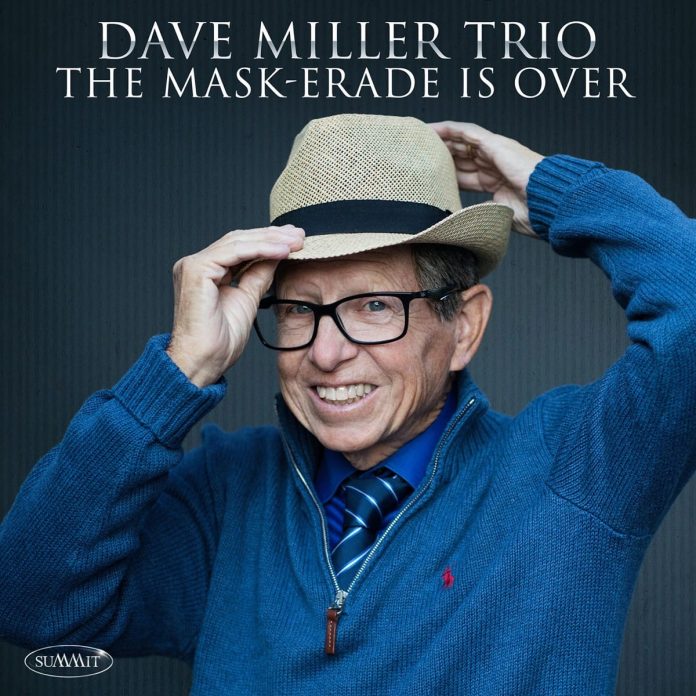 This is clearly a collection of personal likes by American pianist Dave Miller – so there’s his early inspiration in the form of classic bebop: Anthropology, Yardbird Suite and Bud Powell’s Hallucinations, which he plays closer to Powell’s interpretation than the faster Oscar Peterson version which was under the title Budo (as was Miles Davis’s).

The title track (actually rendered as The Masquerade Is Over) is apparently a reference to the pandemic, somewhat optimistically it has to be said, and maybe a symptom of long-covid is that you mis-title tracks. Track three is clearly the Bill Evans’ composition The Opener, not Masquerade, and vice-versa. But this is a minor matter and doesn’t detract from what is a proficient and upbeat trio recording.

Classic ballads are covered through attractive takes on Berlin’s Be Careful With My Heart, Rodgers & Hart’s The Blue Room and Coward’s Someday I’ll Find You, and an uptempo bossa nova is thrown in in the shape of Estate.

However, it’s You Don’t Know What Love Is that captures the attention, as Miller slowly and considerately solos, a touch of melancholia, before being joined by the others, and the tone is lightened without losing any of the feeling.

Bassist Andrew Higgins and drummer Bill Belasco give tight and solid support, with occasional opportunity to solo – Higgins notably on You Don’t Know and Belasco on Hallucinations. Overall it’s not world-changing (unlike the title’s allusion), but a relaxed album from a pianist with good technique and a fine sense of swing.

Discography
Anthropology; Be Careful It’s My Heart; The Masquerade Is Over; The Opener; Someday I’ll Find You; You Don’t Know What Love Is; Yardbird Suite; Estate; In Your Own Sweet Way; The Blue Room; Dusty; Why Did I Choose You; Hallucinations; Just Imagine (52.06)
Miller (p); Andrew Higgins (b); Bill Belasco (d). October 2020, Oakland, Ca.
Summit SMT784