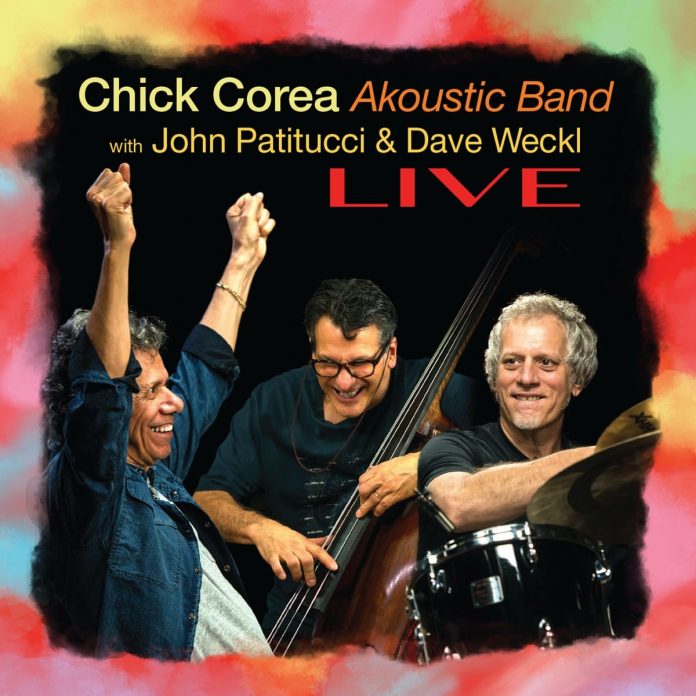 On an early trailer for this previously unheard show from 2018, Chick Corea remarked on how much the Akoustic Band had evolved since the group’s formation in 1987, and how, with age, “a new richness” had entered the music that they all were enjoying.

It was the first time Corea, bassist John Patitucci and drummer Dave Weckl had played together as a trio in 20 years, and what the pianist was referring to was a fresh, more matured, approach all three players had to the music. Here was a band in an intimate 300-seater venue, stretching out over old standards and classics from Corea’s vast catalogue, but in a noticeably more loose and daring way.

The resulting set we have here, remarkably recorded on the first night of the tour, captures that richness. The trio open at full throttle with an extended arrangement of their dynamic signature piece, Morning Sprite. After establishing the tune’s main theme, Corea’s Latin-style riffing is underpinned by Weckl, whose soft ride and rim-clicks build a cowbell-heavy mozambique groove and some driving swing. Patitucci’s deep, muscular walking lines and dotty phrasing are also prominent, complementing Corea’s Monk-like playfulness and the jerky planting of his bright, spacious chords.

After such a lively start, the run of ballads that follow – Corea’s Japanese Waltz and a more mid-tempo swing through Sammy Fain’s That Old Feeling – offer moments of lush improv and interplay. But it’s a more subdued reading of Ellington’s In A Sentimental Mood that truly spills magic. Announced with a long piano intro and Patitucci entering over whisper-soft brushes, the near 10-minute arrangement plays as an uplifting reminder of the trio’s sensitivity to light and shade, not to mention their mastery for lifting well-worn standards like this to another place.

Naturally, the Latin side of the band is also exploited through the set and it’s crowd pleasers such as On Green Dolphin Street, Humpty Dumpty and the high-spirited Rhumba Flamenco that stand out. The Elektric Band hit Eternal Child sounds remarkable unplugged too. Stripped of the Spanish guitar, synths and castanets that marked the original, it’s reimagined, quite beautifully, here with brushes, light piano and mournful bowed bass.

Listening to the 13 tracks packed into this uplifting set, it’s sad to think that the untimely passing of Corea early this year means the show we have here is not only the pianist’s first posthumous release, but also the Akoustic Band’s last recorded work. Corea worked with some celebrated trios during his varied career, but none perhaps as loved as this one. Closing with Chick’s wife Gayle Moran Corea joyously singing Return to Forever’s You’re Everything, this set is the Akoustic Band at their very best. A most fitting farewell.

Ian Lomax - 25 August 2020
I try to resist the temptation to jump to premature conclusions when reviewing, but the moment I heard the Clifford Brown inspired first track on this album, On The...