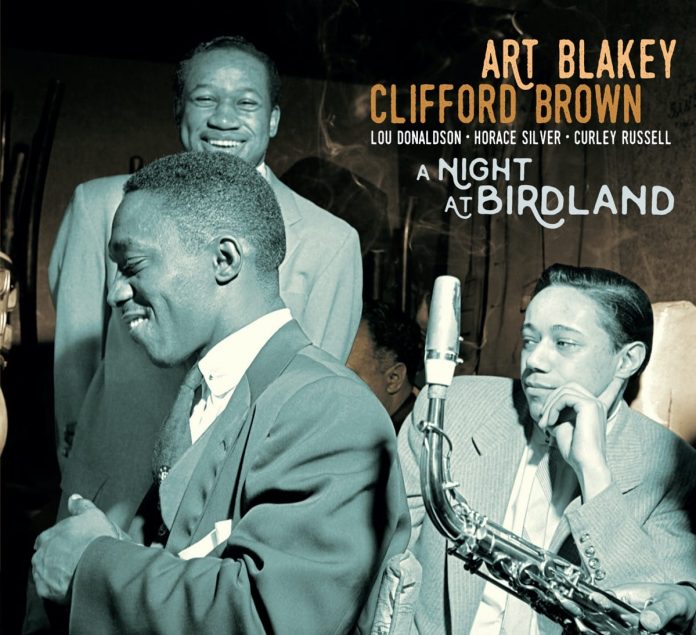 The music on this album was recorded by Blue Note’s Rudy Van Gelder in February 1954 during a live performance in New York’s Birdland jazz club. It wasn’t meant to be an Art Blakey-led date but a session by a group styled as the Blue Note All Stars.

However, before the recording Blakey slipped a couple of dollars to the club’s MC, four-foot-tall Pee Wee Marquette, and told him to introduce the ensemble as the Art Blakey All Stars. The following year, Blakey and Horace Silver were to co-found the band that became the Jazz Messengers.

The music was initially released on three 10” records and then in 1956 on two 12” LPs – entitled A Night At Birdland, Volumes 1 & 2 – Art Blakey Quintet. Blakey is accompanied by trumpet prodigy Clifford Brown (who was tragically killed in a car accident two years after this recording), Lou Donaldson on alto, Horace Silver piano and Curley (aka Curly) Russell on bass. It’s regarded by many as one of Blakey’s best line-ups.

The album has three of Silver’s originals in Split Kick, Quicksilver and Mayreh, the latter’s title coined by Silver in imitation of the way Donaldson pronounced the name Mary. Wee Dot is a classic hard-bop performance taken at pace by the band. Russell, incidentally, had been the bassist on the original recording by Leo Parker.

Donaldson features strongly in a pulsating Night In Tunisia and solos exquisitely in the ballad If I Had You. Brown is moving on trumpet in Once In A While and both he and Donaldson are masterful in the two Charlie Parker classics – Now’s The Time and Confirmation. The band close both sets with their spritely take on Lullaby Of Birdland, the song composed by George Shearing in dedication to the venue.

Art Blakey’s quintet is in sparkling form here. These influential hard-bop recordings helped to propel his and Silver’s careers as bandleaders and made Brown into one of jazz’s most in-demand trumpeters.