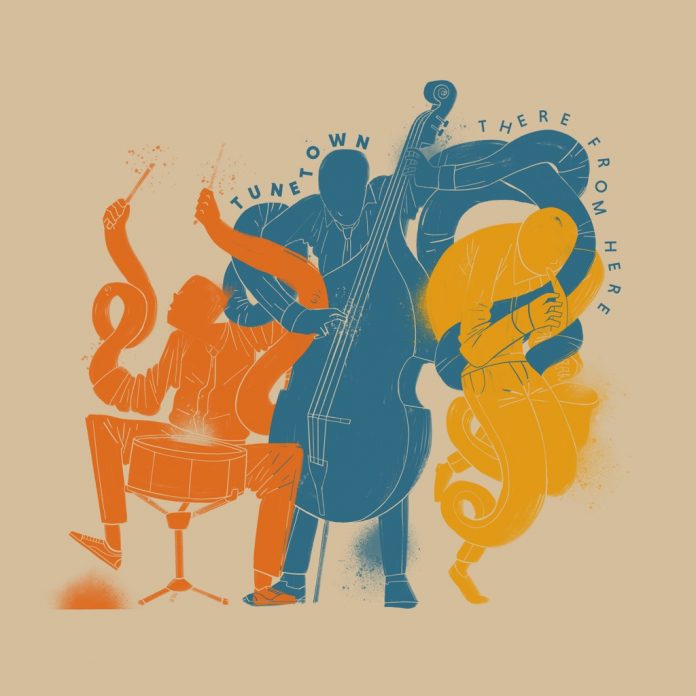 TuneTown are a chordless trio from Canada featuring saxes, bass and drums. The opening Sonic Handshake is a muscular burst of energy from the three instruments that indicates their sonic approach in fine style. The Monks Of Oka is a tribute to Thelonious Monk and is one of the few tracks that features straightahead forward momentum in the recognised format. Some of the composer’s musical quirkiness is captured on this piece which also features a well-wrought bass solo and a drum workout.

As She Wonders is inspired by the Sammy Fain composition Alice In Wonderland and is dedicated to saxophonist Jefferson’s mother, Alice. It features Jefferson on soprano and a strummed introduction from bassist Artie Roth. Much of this composition and the next five follow a varied course: short segments of soprano sax stop and change direction and tempo as the rhythm players thrash around merrily. A lot of this music is in a free mode with some powerful saxophone variations and many varied, integrated contributions from bass and drums.

Ellington’s Sophisticated Lady begins with some out-of-tempo noodling by all three before Jefferson picks up the melody and, surprisingly, plays it as an ultra-slow ballad. Somehow Ellington’s well-known tune seems very different with this treatment. The stop, start, slow down and begin again style is also much in evidence here.

Split Infinity is more in the straightahead tradition and features tightly integrated playing from sax, bass and drums. The other standard, All Of You, is played as a lyrical ballad and almost conventional. On track 9, Kindling, the trio plays straightforward swing and this is one of the best tracks.

The three musicians are all very accomplished on their respective instruments and solo impressively. They also integrate effectively on the original charts, written by them. The sound recording is very good and live although the bass drum does sound to have been damped down.