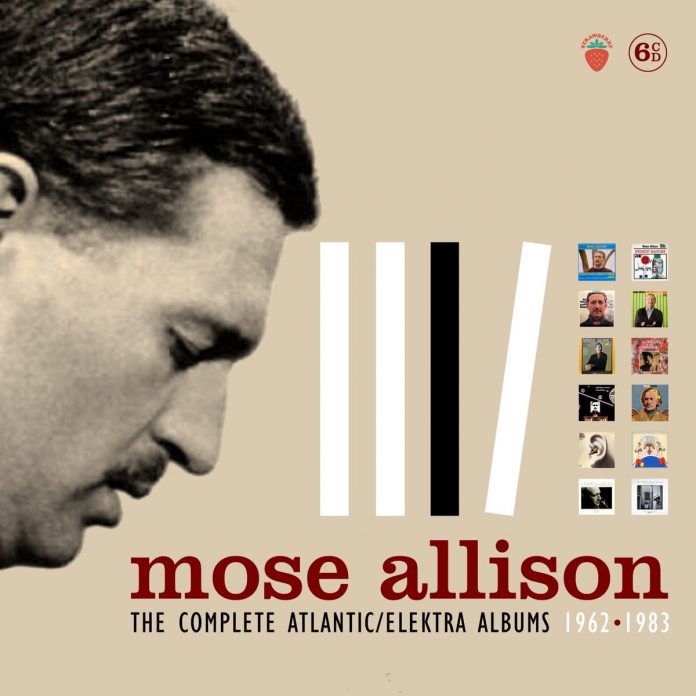 At first (and even second) glance this is a daunting box set of recordings. It contains 12 previously issued Allison albums with a total of 124 tracks (including some remake titles), reprising an inventive and productive 20-year period in his already distinguished career.

Immaculately packaged, with an informative booklet, it includes full discographical details, and succinct appreciations of each album by Bob Fisher. In an engaging essay, critic Brian Priestley (who interviewed Mose at one of his many Pizza Express appearances) writes: “One of the aspects of Mose’s career was his ability to revisit his songs in different formats over his albums and there are several appearances of the same songs, in live settings, with horns or his most favoured line up of simply his voice and piano with bass and drums.”

Baptised Allisonians will probably have (and treasure) several, if not all, of these sessions; the uninitiated or agnostic should certainly give them a hearing. One double CD a day for a week should work wonders. Rather than attempting a lengthy description and analysis of these milestones in the Allison odyssey, I offer a few comments on some of the plums in this excellent confection.

Swingin’ Machine features a trio with two additional horn players, Jimmy Knepper and Jimmy Reider, and includes satisfying renditions of Ellington’s I Ain’t Got Nothing But The Blues and an unusual pop song of the late 1930s, So Rare.

The Word From Mose is regarded by many critics (including Richard Cook and Brian Morton) as his greatest achievement, with three of its titles – Don’t Forget To Smile, I’m Not Talking and Days Like This – as being among “the greatest songs ever written”. Praise indeed.

Wild Man On The Loose contains nine songs (all Mose compositions), and was one of his most popular LPs. Record Mirror reviewer Norman Jopling welcomed “the still hip Mr. Allison and a collection of songs which don’t include Parchman Farm and/or Baby Please Don’t Go. Really good piano work, jazz-blues tinged and vocals which you either take or leave”. My advice? Take them – try the exhilarating title track.

Mose Alive!, a recording made at The Lighthouse in Hermosa Beach, California, includes Seventh Son – already a popular hit, as well as the mock-serious (and ingenious) Smashed. Also and much to the audience’s obvious delight, there is a surprisingly uptempo reworking of Parchman Farm.

I’ve Been Doin’ Some Thinkin’ opens with an Allison original, Just Like Livin’ – philosophical reflections on the human condition – and a slow-tempo You Are My Sunshine. The best song has to be the ingenious Your Molecular Structure, but Everybody’s Cryin’ Mercy must rank as one of his most biting critiques of hypocrisy. On this album also, Allison’s piano playing is notably more aggressive.

…Hello There, Universe features Mose very much at home with an all-star jazz combo, including Pepper Adams, Joe Henderson and Jimmy Nottingham. A fast-paced Somebody Gotta Move shows off the baritone sax of either Adams or Seldon Powell, and the sections meld and swing from the outset. The haunting Monsters Of The Id has Mose soberly discoursing on recent political protests (and violence) in America. An alternately gloomy and sprightly Blues In The Night is a cover of Big Joe Turner’s classic rendition.

Western Man has less to recommend, with Mose (for the first time) on electric piano, but with hardly memorable songs – apart from Do Nothing Till You Hear From Me.

Mose In Your Ear, another live recording, has Allison at his most declamatory on Look What You Made Me Do and a fast-talking The Seventh Son. A long rendition of Powerhouse (8.37) demonstrates Mose’s “modernism” in full (cod Cecil Taylor?) pianistic flight.

Your Mind Is On Vacation (his final Atlantic recording) features guests David Sanborn, Al Cohn, Joe Farrell and Al Porcino performing 10 originals, including remakes of What Do You Do After You Ruin Your Life, Swingin’ Machine, and Your Molecular Structure. The title track (minus the horns) has the surreal introduction “Your molecular structure is really something swell, a high-frequency modulated Jezebel”.

The final two albums – Middle Class White Boy and Lessons In Living – both made for Elektra Musician – have much to recommend them. The first features Allison leading a sextet with Joe Farrell and Phil Upchurch. In evident good humour, Mose (again on electric piano) discusses How Does It Feel (To Be Good Looking?), with “sympathetic” backing from Upchurch. In a revealing comment on his repeated use of the “Kiddin’ On The Square” refrain on the song with that title, Allison related: “I tell everybody the key to my writing is ‘Kiddin’ On the Square’. I even wrote a song about it. You’re joking on the surface, but you’re saying something serious underneath it. In the area where I spent my childhood [Tippo, Mississippi], nobody said anything straight out – it was all aphorisms, irony, hyperbole or understatement. If you don’t understand that you don’t understand ‘Kiddin’ On The Square’.”

Lessons In Living, recorded at the Montreux Jazz Festival in 1982, has a super-charged Mose at the top of his game – ably supported and encouraged by Lou Donaldson, Eric Gale, Jack Bruce and Billy Cobham (and a wildly enthusiastic audience). You Are My Sunshine received perhaps its definitive performance – with a plangent solo by Donaldson.

The journal Musician announced that “Mose Allison is a unique figure in jazz, always on the very edge of wide public acceptance, playing and developing the almost forgotten art of song and lyric”. This collection, taken in measured doses, illustrates and affirms that statement.

Matthew Wright - 26 September 2021
Because of apartheid and the political situation in their country, the work of many South African jazz musicians was overlooked, ignored and systematically denigrated - undeservedly so, as many...