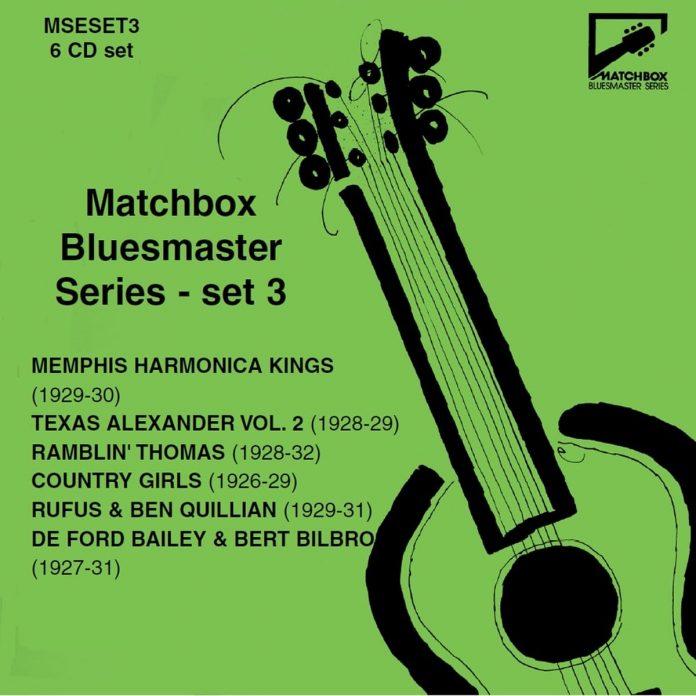 The 42 LP albums that make up the Matchbox Bluesmaster Series were released by Saydisc Records between November 1982 and June 1988. Most of the albums were subtitled “Complete Recordings in Chronological Order” with a few under the subtitle “The Remaining Titles” or “New to LP”.

The originating 78 rpm records (many of them extremely rare) were provided by several collectors under the editorship of well-known Austrian collector Johnny Parth and were remastered by Hans Klement of Austrophon Studios in Vienna. Johnny Parth had already created his extensive Roots Records label which Saydisc distributed in the UK and the Matchbox Bluesmaster Series was a carefully sculpted edition of black blues roots music giving a broad view of the genre.

The series documented the early days of blues, hokum (a kind of arch, nudging blues style popularised in the city) and gospel music from 1926 to 1934 and gives an insight into the way that black music was first released on record. The music of these singers formed the backbone of later urban blues, rhythm-and-blues and, of course, rock ’n’ roll. The songs are frequently raw and primitive in character, but some outstanding playing and singing shines through many of the performances.

Putting this music into perspective are the masterful liner notes by respected blues historian Paul Oliver. They alone are worth the purchase. The present Matchbox Bluesmaster Series has been transferred from the 1980s vinyl pressings by Norman White using high-end transcription techniques. This was clearly a challenging task but worth the effort. Not surprisingly, the original master tapes for the vinyl releases vanished long ago. Saydisc say that they have in their vaults many more pre-Bluesmaster blues albums which may be issued on CD in due course. Let us hope so.

This is the third set to be released. Volume 1 is Country Blues and Ragtime Blues Guitar, 1926-30 and Volume 2 is Country Blues and Great Harp Players 1927-32. The CD sets are available at a realistic price (£29.99) and the release of this important series for the first time on CD should appeal to serious blues collectors and also attract (hopefully) a new generation of early blues lovers.

François van de Linde - 10 April 2022
Cloudfish takes pleasure in creating ugly beauty. Its debut album But Is It Art? features such oddities as Kraaak, which mixes crunchy violin and grandma’s gobbling noise at the...

Jazz Journal - 31 May 2022
In conceptual terms, there is little here that this undeniably talented saxophonist has not expounded on previous, better efforts ('Dis', 'Places'), and the presence of Aber­crombie and Vasconcelos has...