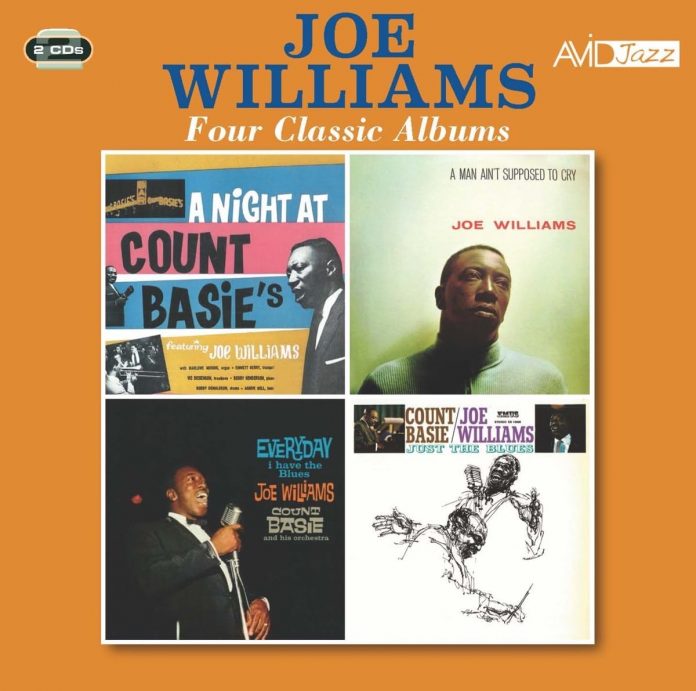 The Avid classic albums juggernaut rolls on with four LP albums here from the 50s hey-day of poll-winning vocalist Joe Williams. His powerful voice and distinctive style boosted the popularity of Count Basie’s acclaimed orchestra, with whom he was the regular featured vocalist from 1954-60, and a frequent guest in later years.

The first LP album, recorded live on Vanguard in a small and noisy bar in Harlem (“Count Basie’s”) is rather a mixed-bag oddity. Basie acts as MC, but doesn’t play. Joe sings on just three tracks, sticking to his forte, the blues, and acknowledging the legacy of Big Joe Turner and Jimmy Rushing.

Unusually, for a small group, both piano and organ are included. They work well together with a duet feature in Too Marvellous For Words. Marlowe Morris, admired by Basie, learned organ from Fats Waller. Bobby Henderson, an experienced Harlem pianist, has a trio feature in Please Don’t Talk About Me on his first ever recording. Indiana, Perdido and Canadian Sunset feature some fine brass solos from mainstream specialists Emmett Berry and Vic Dickenson, the latter outstanding in Canadian Sunset. Background noise is often quite intrusive, and recording quality and balance below studio standard, but the music is interesting and enjoyable.

In contrast, the following album, A Man Ain’t Supposed To Cry, is polished and commercially slanted for popular romantic appeal. It consists entirely of lovelorn ballads similar in theme, tempo and style. Jimmy Mundy’s string-laden orchestra provides discreet backing, but with little jazz styling or imaginative arrangement. Williams’ rich, velvety bass-baritone voice invites comparison with Billy Eckstine’s, but has its own distinctive style in deploying vibrato, dynamics, falsetto and angular jumps. His approach to ballads ranges from deepy tender to dramatic – sometimes perhaps a little overly in the latter respect, as in What’s New.

Things liven up on CD2 when the celebrated Basie Orchestra, in a class of its own for big band blues, finally bursts on to the set with powerhouse lift. Backing arrangements by Thad Jones and Frank Foster work superbly. Animated and expressive, the smoothly crafted and rhythmic flow of Joe’s phrasing incorporates authentic earthy character in his powerful, grainy bottom register. Everyday, his first big hit, is particularly striking. It’s A Low Down Dirty Shame features memorable fills from Al Grey’s plunger-muted trombone. More recordings in similar style, with the full Basie orchestra, and almost as good, follow in the fourth, rarely reissued album, Just The Blues.

Unfortunately, the discographical data for CD2 is sorely amiss. For the Everyday I Have The Blues album there are errors in the dating and location, also with the extended  personnel, and even the initial tracks sequence. For Just The Blues, Joe’s accompaniment is given as only Count Basie (p, org) whereas it should have listed the entire Basie orchestra. This seems regrettably careless, and surely avoidable.

However, nobody can deny that this budget label provides excellent value for money on musical quality and quantity. The recordings on this set deserve reissue, offering plenty of enjoyable high spots.

Sascha Osborn: Looking Out and After