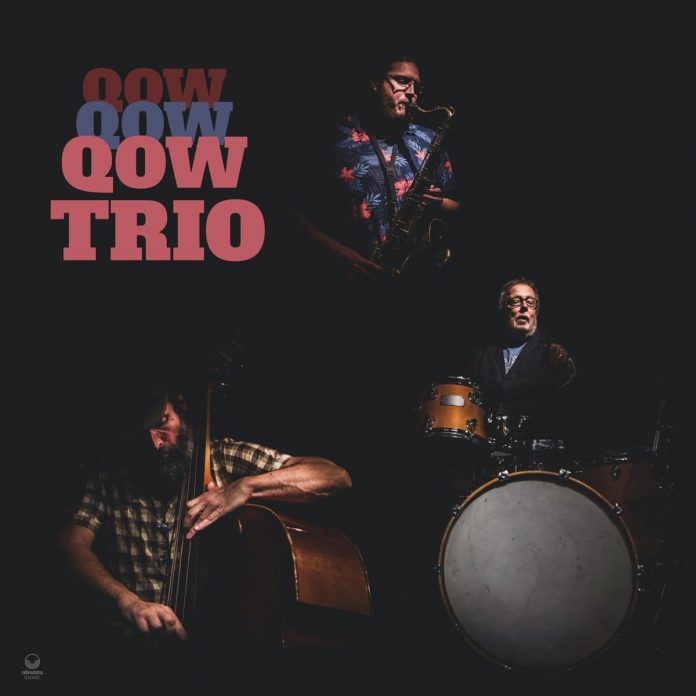 According to drummer Spike Wells, the QOW Trio – named after a freeish Dewey Redman piece – started as a homage to the Sonny Rollins piano-less trio of the late 1950s, but soon broadened its scope to cover a much wider repertoire. So now the American Songbook gets a look in, so too a Charlie Parker classic, a Joe Henderson piece and, in Pound For Prez, a paraphrase of a Lester Young solo on Count Basie’s Pound Cake, plus a couple of originals.

Whatever the material, what is striking about this set is the freshness with which all three musicians approach their work. Ignoring the Rollins references, Riley Stone-Lonergan is very much his own man, his tenor ever questing in its explorations of melodic and harmonic possibilities, never afraid to push to the outer limits, as on the title track.

Eddie Myer consistently comes across as the most interesting player here, his bass quiet but insistent in its contributions, his solo on Serenity superb. Spike Wells is, of course, utterly himself throughout, his clattering drums adding a necessary vigour to proceedings. But this is to pick out individuals when it is the trio as a whole that matters. They play together like a team, aware what the others are doing and giving each other room to breathe. Given the age of some of their material, what stands out is their modernist approach, their instinctive ingenuity and daring.

Spike Wells remarked that this recording “was the most enjoyable time I’ve ever had in a recording studio” and he and his colleagues’ pleasure shows on every track. Were it not for lockdown, this trio would be packing out the clubs.

Discography
A Slow Boat To China; QOW; Serenity; Cheryl; Qowfirmation; God Bless The Child; It’s All Right By Me; Pound For Prez; You Do Something To Me (50.07)
Riley Stone-Lonergan (ts); Eddie Myer (b); Spike Wells (d). Harlesden, London, 2020?
Ubuntu Music UBU0078

Dave Foxall - 28 June 2019
Starting as a jazz-meets-hip-hop jam band with a loosely-defined membership, Bright Dog Red has become a fixture on the NYC jazz and improvisation scene and I can imagine them...