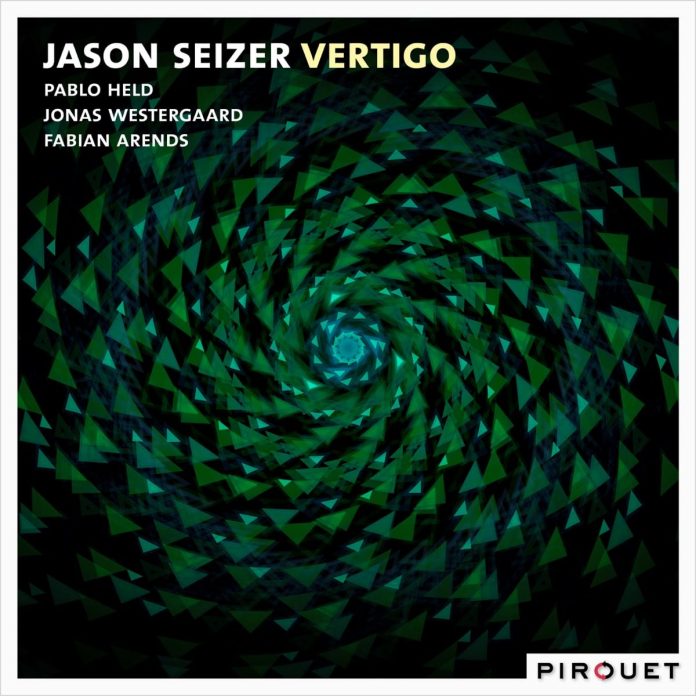 As founder, artistic director and sound engineer at Pirouet Records, Jason Seizer (b. Stuttgart, 1964) could be forgiven for somewhat neglecting his parallel career as a musician. Taking up the saxophone at the relatively late age of 23, he studied at Hilversum before sojourning in New York under the tutelage of Joe Lovano and Ralph Moore. Yet despite the early promise of Sketches (Organic Music, 2000) and two brilliant early Pirouet dates with pianist Marc Copland in 2004, Vertigo is only his fifth album as leader for the label.

Continuing in a broadly similar vein to 2015’s Cinema Paradiso, mid-60s Coltrane and Shorter set the parameters, and the silver screen once again proves a fertile source of material (Saul Bass’s classic poster for Hitchcock’s Vertigo is even echoed in the cover art). The exceptional talents of Pablo Held and Fabian Arends (Fosterchild) are fixtures in Seizer’s working group, Westergaard replaces long-term bassist Matthias Pichler, and with Ralf Weigand’s crisp live recording capturing every sonic detail, the mise-en-scène is complete.

The set opens with Seizer’s My Reverie, the saxophonist’s commanding tone a momentary throwback to classic post-war jazz balladry. Max Steiner’s Camp By The Lake (from John Ford’s classic Western The Searchers) is recast as a mid-tempo modal workout, and as Seizer reaches for the upper register Held and Arends create a sublime rhythmic turbulence. Held’s sole composer credit is the enigmatic Seizing – not quite a free ballad, but as Seizer probes its cleverly concealed contours there’s a joyful sense of abandon redolent of Lovano’s early Blue Notes.

Two of the pieces from The Movie Suite appeared on Cinema Paradiso, but here they’re seamlessly re-sequenced into what could almost pass as a new composition. Held’s deeply searching solo seeks the common ground between Tyner and Evans, and as Seizer unleashes pent-up energy in a burning Traneish flight, the temperature spirals into the red. Closing with an oblique reading of Bernard Herrmann‘s love theme from Vertigo, the improvised coda runs the full gamut of emotions, leaving the small but appreciative audience at Bayerischer Rundfunk’s Studio 2 baying for more.

Michael Tucker - 25 February 2021
As the extensive and informative sleeve-note (credited to one DSP) documents, the origins of this release – as poetically compelling as it is rhythmically energising – lie in the...