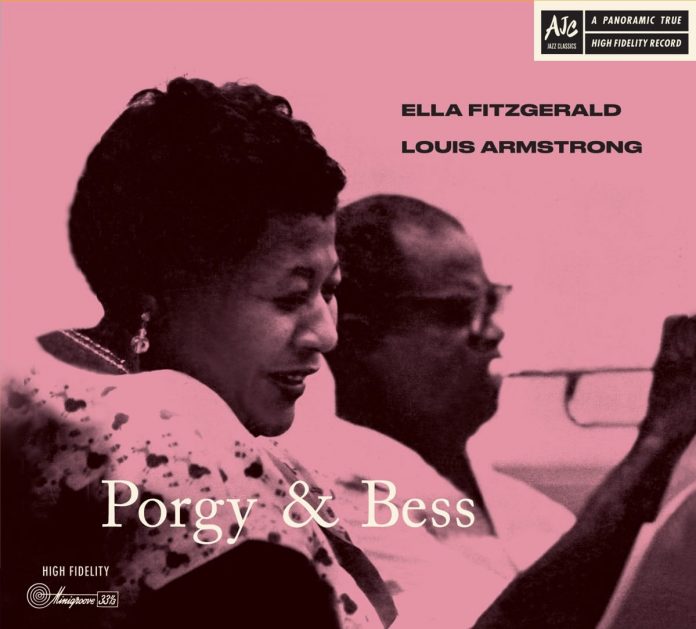 The 1935 New York premiere of Porgy and Bess featured classically trained African-American singers, blending jazz and blues expression with traditional operatic concepts. Gershwin described his groundbreaking masterwork as an “American folk opera”.  Many of the songs, particularly the ubiquitous Summertime, soon became familiar popular standards, and proved of lasting interest to jazz musicians over the years. Innumerable recordings have included albums by the MJQ, Miles Davis and Oscar Peterson, and Billie Holiday’s memorably moving hit, I Loves You Porgy.

In 1957 impresario Norman Grantz decided to produce an album of selected songs from the show, featuring only the voices of the two main characters. Going straight for the top, he booked Ella and Louis again in their third and final collaboration for him. The triple appeal of Ella, Louis and Gershwin’s music could hardly fail. It would be unfair not to acknowledge, also, Russell Garcia’s effective arrangements, the studio orchestra slipping comfortably as required between concert-hall theatrical lushness or bombast, and raunchy big band jazz, as in the opening overture medley.

Given the exceptional talents and style of the two star vocalists, we are treated to some unique, personalised interpretations which transform many of the songs. Ella’s exquisite voice, supple and effortless, deals faultlessly with the sometimes challenging lyrics and melodies – e.g., in Buzzard Song (which incorporates theatrical laughter and shouts) and in the street vendors’ medley.

Although no match in polished finesse, Louis’s gruff and expressive vocals provide striking tonal contrast and sometimes dig more deeply into the emotional charge of the  lyrics, from joyous gusto to lament. His superb poignant vocal in Bess, Oh Where’s My  Bess? was acclaimed by Ira Gershwin himself.

Outstanding shared tracks include a classic version of Summertime, and a raunchy It Ain’t Necessarily So. Louis’s majestic trumpet is fairly rationed much of the time, getting most space to stretch out in A Woman Is A Sometime Thing and There’s A Boat Dat’s Leavin’ Soon For New York. Ella, though trumpet-less, could readily phrase like a creative instrumentalist.

The original notes conscientiously assign each song to its location, act and scene in the full opera, besides providing other information. This CD reissue of celebrated recordings adds two alternative takes in mono not included in the original LP, plus one unused track, Red-Headed Woman, a 12-bar mid-tempo trumpet solo workout for Louis.

All in all, a masterclass vocal collaboration from two truly great artists.

Matthew Wright - 07 September 2021
The Malombo music of Philip Tabane first appeared at Soweto’s Castle Lager Jazz Festival in 1964, beginning as a flute, guitar and drums trio. This recording, from 1969, is...