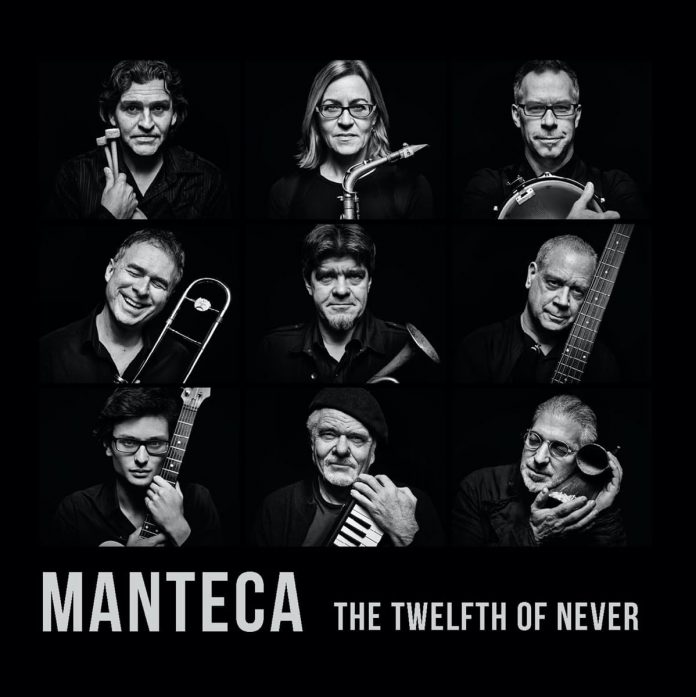 JJ readers are informed enough to know that Manteca is a Dizzy Gillespie, Chano Pozo and Gil Fuller tune. But it’s also a Canadian band of longstanding. They might not know that the 41-year-old band’s 12th album is its first to include a guitarist: Nick Tateishi, who plays acoustic and electric. The Twelfth Of Never is thus an album with a “twang”, as Manteca’s witty leader, percussionist Matt Zimbel, puts it.

Manteca the tune is a throbbing embodiment of how Afro-Cuban rhythm invests jazz with added firepower. But Manteca the band keeps the flames under control, which may have much to do with the number of its personnel – nine. The nonet, as in Miles Davis and the birth of the cool, brought respite from the jazz furnace’s open doors. But it’s not so much that; more the way temperature control has to deal with two percussionists and a kit drummer. Seven of the album’s eight charts are composed and arranged by Zimbel and pianist Doug Wilde, with one (Five Alive) by trumpeter Jason Logue. Each of the nine personnel, bar drummer Charlie Cooley, doubles on other instruments.

The arrangements are choice and pursue a variety of moods ranging from the quietly animated to the mysterious and upbeat. Each track gives prominent parts to soloists – Logue, who also handles flugelhorn, is an early example on the opening Meanwhile Tomorrow; it’s a simple, lightly-adorned melody that drifts along and has a jolly bridge. Bassist Will Jarvis and his percussionist colleagues never let their potential motor energy undermine the moodiness of Illusionist, on which saxist and multi-woodwinder Colleen Allen is the emerging voice. Tateishi comes late to Lowdown with some fierce background shredding in a tune that suggests, like others on the album, some offstage or accompanying drama, cinematic in nature.

If the heat was turned up a rack on Lowdown, it subsides just as quickly on Smoke And Mirrors to the ethereal and magical, again redolent of some hidden goings-on. Not least of the band’s capabilities is its courage in having a trombonist, Mark Ferguson, break through the shadows on this one. And his adding of late colour on vibes is a good example of the way the band always sounds, with the aid of studio legerdemain, as if there are more than nine musicians on set. The final track, ‘Twas Brillig, may refer to the nonce word in Lewis Carroll’s Jabberwocky but also has the warmth of a free-wheeling Irish dance. Allen’s bari elbows forward on Logue’s rousing Five Alive as if to utilise all 30-odd instruments at the band’s disposal.

The album has been described as “introspective”; it’s anything but. Manteca is always looking outwards, even when what’s apprehended is indefinable, even inimical, or to be unequivocally welcomed, as denoted by the clapping on Five Alive.

Steve Voce - 10 October 2020
The Parker quartet album I review elsewhere (Bird’s Nest 244105), although not necessarily his greatest, reveals that Parker was assuredly the most daring soloist that jazz has produced and...