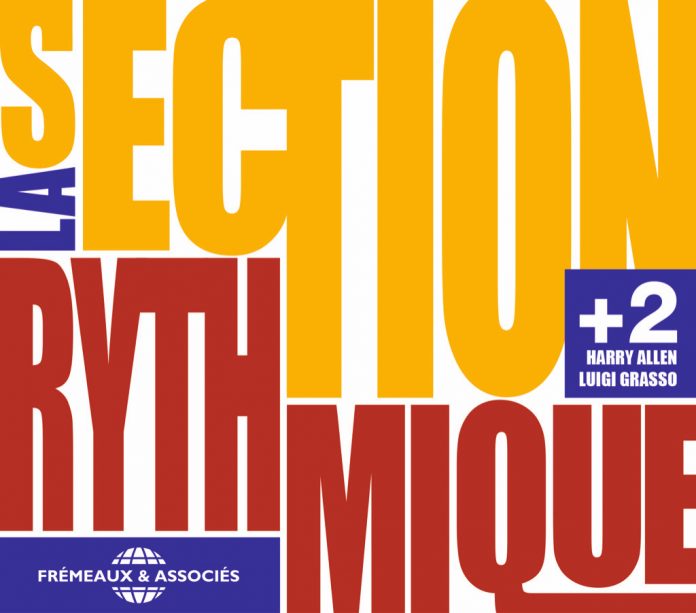 This rhythm trio (guitar, bass and drums) won awards with its first album in 2015, and has now backed, on concerts and recordings, such memorable jazz artists as Scott Hamilton, Evan Christopher, Lillian Boutté  and Ken Peplowski, amongst others.

On this release the trio plays host to seasoned New York tenorist Harry Allen, paired with an exciting and skilful young Italian altoist, Luigi Grasso – a new name to me. Guitarist David Blenkhorn and bassist Sébastien Girardot I have heard and enjoyed previously, as key contributors on the fine Django A La Créole albums on Frémeaux. Gillaume Nouaux’s supple and attentive drumming fits in neatly in the closely integrated and tastefully swinging rhythm backing.

Allen’s light-toned, mature and fluent phrasing is complemented effectively by Grasso’s rounded, exuberant and expressive alto. There’s close rapport throughout in ensemble, and some sizzling exchanges in the upbeat Blues Up And Down.

Steeped in jazz heritage, the repertoire alternates throughout between upbeat and laid-back. The laudably open-book approach to style salutes classic jazz with a refreshingly re-worked blend ranging from mainstream to bop.

The enthusiastic Grasso reins in for the Hodges classic Day Dream, almost rivalling the master himself with an exquisitely nuanced performance. Allen follows on with breathy hints of Ben Webster, and they both reprise Hodges and Webster on the beautifully arranged One For Duke. In The Still Of The Night is another lovely arrangement and performance, but every track appeals. Highly recommended.