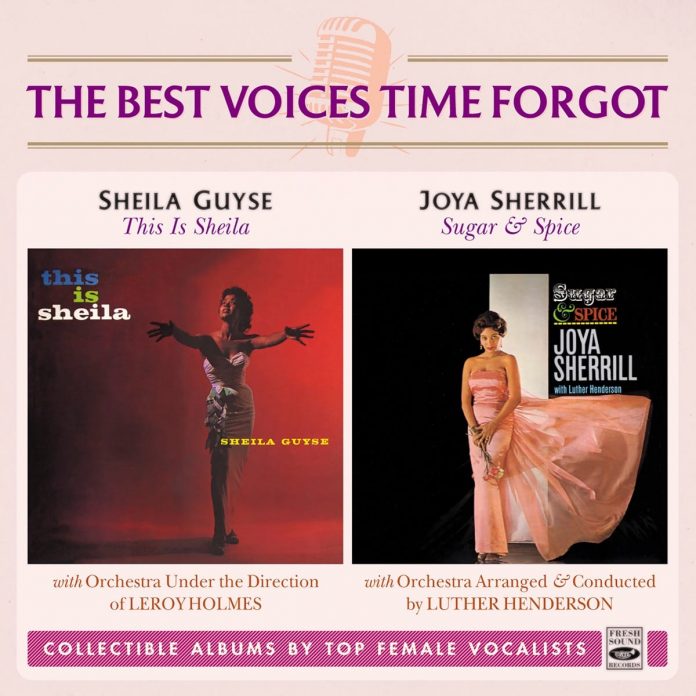 Of these two is Fresh Sound’s The Best Voices Time Forgot series one (Guyse) has a background which has largely been hidden from history, while Sherrill, thanks in no small part to her Ellington association, surely qualifies as the least forgotten.

As it is, with this release not only do we get an original album per singer but also bonus tracks, the last one credited to Guyse and the last six credited to Sherrill. These fill in the picture to the optimum point given the time that’s passed.

At the age of 15 or thereabouts Guyse made an appearance at one of the amateur performer contests at the Apollo in Harlem, which in the early 1940s was probably the nearest thing to the current glut of TV talent shows. Later on in the same decade she appeared in the Broadway musical Memphis Bound, and approximately 13 years later she cut the album under the spotlight here, which documents a singer with more heart in that nebulous notion which is superior pop than in jazz as such. That said, she knows how to swing, as she does on Let There Be Love, in an arrangement so boisterous it would be hard for any singer not to.

Easy Does It embodies the title nicely, and with such élan that it might have found a comfy home in that hour of Radio Two’s Sunday schedules that Alan Dell used to occupy. If there’s any justice in this world I’m Glad There Is You might find a similar home in the hour currently occupied by Don Black.

Sherrill got her first Ellington gig in 1942, at the age of 17, while a couple of years after the album discussed here was released she was touring what was then the Soviet Union with a Goodman band. The depth of experience implied by that is arguably the major contributor to the musical success of an album of lullabies-with-jazz, which in lesser hands might have resulted only in so much schmaltz.

Rain Rain Go Away is given a veneer of maturity which increases rather than usurps the frivolity of the song, while Three Blind Mice finds the protagonists transformed into hard-drinking swingers who see the error of their ways.

Twinkle Twinkle Little Star gets an arrangement of the type which, were it written today, would sound ersatz, possibly because experienced studio musicians like Richardson just aren’t out there anymore.

Discography
(1) Let There Be Love; I Cover The Waterfront; I Warm Up; Out Of This World; You Took Advantage Of Me; You’d Be So Nice To Come Home To; Easy Does It; You Do Something To Me; Make Love To Me; You’re Driving Me Crazy; I’m Glad There Is You; Easy To Love; Run (2) Little Bo Peep; Old Lady In A Shoe; Rain Rain Go Away; Three Blind Mice; Twinkle Twinkle Little Star; Peter Peter Pumpkin Eater; Hi Diddle Diddle; Humpty Dumpty; Mary Had A Little Lamb; Hickory Dickory Dock; Little Boy Blue; Rock-A-Bye Baby; Baby Me; Lush Life; Between The Devil And The Deep Blue Sea; Thou Swell; Easy Street; End Of A Love Affair (73.36)
(1) Guyse (v) with orchestra directed by Leroy Holmes. New York, 1958.
(2) Sherrill (v) with orchestra arranged and conducted by Luther Henderson featuring Jerome Richardson (f). New York, 1959, bonus tracks New York, 1957.
Fresh Sound FSR V126

Dave Gelly - 03 November 2020
There are actually two albums on this CD, although you wouldn't know from glancing at the front cover. But turn it over and a hidden gem is revealed, titled...