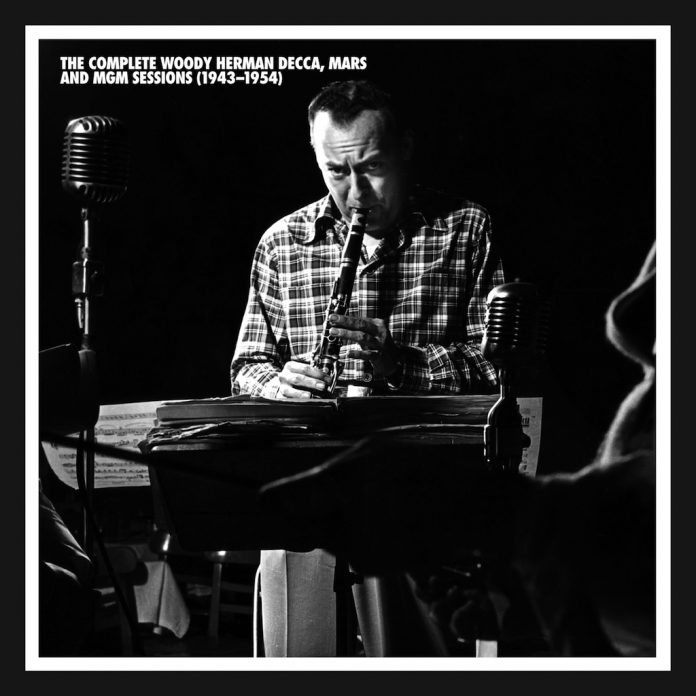 The big-band leaders tended to have long contracts with their record labels – Ellington with RCA, Basie with Columbia and Kenton with Capitol. Woody Herman, who signed with Decca in 1936, was no exception. He stayed with the company until February 1945.

The band had been a co-operative until the beginning of the war, then, as each musician was drafted, Woody bought his shares from him, until eventually he owned the band that had appeared under his name for so long. His love of Ellington’s music made Woody tilt the band in that direction. Not only that, but he began using Ben Webster, Johnny Hodges and Ray Nance whenever he could.

Ben is on the first dozen titles of the new Mosaic set. He and Johnny first began working with Woody at a time when there was friction in the Ellington band – it seems more likely that they were being prima donnas rather than encountering any trouble from the seemingly amiable Duke.

Dave Matthews handled the charts that made the shift towards Duke, but Woody also brought in new writers like Dizzy Gillespie and Gerald Wilson. (Woody was so pleased with Dizzy’s writing at the time – he wrote Woody’n You for the band – that he tried to persuade Dizzy to give up the trumpet and concentrate on his writing). In later decades some of the young men in the Herd used to sneer at Woody behind his back on the bandstand, regarding him as corny and out-dated. And yet he probably gave their chance to more younger embryo stars than did any other leader.

It’s not generally known that Woody recorded with the new Woodchoppers from his then new First Herd – with Bill Harris, Hefti, Phillips, Burns, Jackson, Tough etc, in December 1944, but Decca chose not to issue the results.

This set is one step from potentially concluding one of Mosaic’s most significant achievements – the deserved immortalisation of the career of Woody Herman. I say “potentially” for the label has not yet issued Woody’s tracks from the 30s which, with respect, may be regarded as containing less profound music than that of the other decades, and I know of no plans for Mosaic to acquire Woody’s late albums on the Fantasy or Concord labels. But MD7-223 contains all of the Columbias from 1945-47 and MD6-196 gives us Woody’s complete Capitol output, with the Second Herd overlapping both boxes. The three-CD MS031 presented the 44 Phillips tracks from 1962-64. This new seven-disc set fills in the holes with everything from Woody’s brief and erratic MGM career (1946-52) and the first complete edition of the under-valued Third Herd recordings of 1952-54. If you are interested in buying it, you should hurry, for Mosaic doesn’t have a huge amount of the boxes remaining.

The famed good nature of Charlie Barnet was really tested when first Frances Wayne and then Chubby Jackson and Ralph Burns left to join the Herd. Charlie kept his temper until Frances recorded the Barnet arrangement of Happiness Is Just A Thing Called Joe and it became one of her greatest hits.

By then of course Woody had switched to Columbia and his greatest era, encompassing the First and Second Herds, began.

The Second Herd, characterised by Getz, Sims and Cohn, was in full flight when Woody moved from Columbia to Capitol at the end of 1948. Despite a flying start with charts from Burns and Shorty Rogers, the Capitol issues went downhill in terms of profit over the next two years, and Capitol didn’t renew the contract. Hence the move to MGM documented in this new box.

Let’s be clear, the year with MGM had a lot of good stuff in it, beginning with a nicely cleaned up version of the 1946 Carnegie Hall concert. This takes up the whole of CD3 and overlaps onto CD4. It contains some of the finest jazz that Herman ever recorded, some of the best Bill Harris soloing ever (Bijou, Mean To Me, Everywhere and much more), Flip Phillips (the concert concludes with his feature With Someone New, never recorded elsewhere), that superb rhythm section of Tony Aless, Jackson, Bower and Lamond, and the wonderful walls of brass that surely shook the foundations of that famous hall.

It was only when judged by Woody’s high standards that the commercial things dropped below his best. In 1951 MGM produced the Ralph Burns arrangement of Blue Flame on CD1 which outdoes the two earlier ones featuring Bill Harris with the First Herd. This version is a showcase for one of the best solos that Urbie Green ever recorded, and the sound fidelity is so stunning that it makes a good test record for your hi-fi.

Like its predecessors this Mosaic is meticulously documented with all alternative takes. With Woody’s bands the alternatives are most important because, more than with any other band, the soloists varied their improvisations from take to take. Who’d want to give up those Bill Harris solos, usually vastly different on each take? And, talking of the sainted Bill, I never thought that I’d recommend someone else’s version of a piece over Bill’s. But I have to here, for Urbie Green’s take-over of Blue Flame is dazzlingly articulated to the point of becoming a jazz classic. Other great jazz tracks from the MGM period are the ones with Eckstine and By George, Leo The Lion and Hollywood Blues. Even the lesser tracks feature substantial solos from Phil Urso, Nick Travis, Don Fagerquist, Doug Mettome, Dave McKenna and, on clarinet, notably in the unlikely surroundings of New Golden Wedding, where he is quite dazzling, Woody himself.

Sickened by the musical compromises with Capitol and MGM Woody, with his press agent Howie Richmond he formed his own label – Mars – and a new great era began. Nat Pierce came in on piano to replace Dave McKenna, who had been called up and sent to Korea as a cook.

The Third Herd on Mars gave every appearance and sound of being a trombone band. From time to time the section included Kai Winding, Urbie Green, Carl Fontana and Frank Rehak amongst others. “People tell me I had a great trombone section in that band”, said Woody. “I wish I’d heard it. It seemed like every time the band came together one or two of the trombones would have sent in a dep”.

All bandleaders made “commercial” records to try to make money. Woody was no exception, but of course the straight jazz portion of his output was bigger and usually better than most. This resulted in classics throughout his career, and the best of the Third Herd is as good as the best of any of his other bands. Additionally, the Third Herd’s “popular” tracks were usually fired by terrific jazz solos in the middle of each one. Pianist Nat Pierce and Woody’s old pal Ralph Burns were the chief arrangers, and Nat made sure that the band always had a powerful rhythm section with the first one being Nat, Chubby Jackson and Sonny Igoe. There was a good choice between the tenor players – the heart-on-sleeve swinger Arno Marsh, Bill Perkins and Dick Hafer.

When the band was playing in New Orleans Urbie Green had to return home to his pregnant wife in New York.

A stranger turned up in the band’s dressing room. “Can I help you?”, asked Dick Hafer.

“I’ve come to take over from Urbie Green”, said the young man.

“You’ve come to take over from Urbie Green?”, asked Hafer in disbelief while the rest of the band fell about laughing.

They stopped laughing later that evening when Carl Fontana stood up to take his first solo with the band.

Before Carl arrived, Four Others was already one of the greatest performances by any trombone section – in this band all soloists, Frank Rehak, Vern Friley, Kai Winding and Urbie Green. Giuffre wrote that, and Burns came up with a uniquely original arrangement of Stompin’ At The Savoy and a group of fine originals that included Men From Mars and Beau Jazz. Nat’s charts included a swinging Blue Lou. In between the jazz highlights there were many good “novelty” records, often garnished, as I said, with good jazz solos.

Woody couldn’t battle the major record companies, and his last Mars session was done on 30 March 1954. He brought tenor man Sam Taylor in to feature on Castle Rock and Mess Around in a vain attempt at the R&B market.