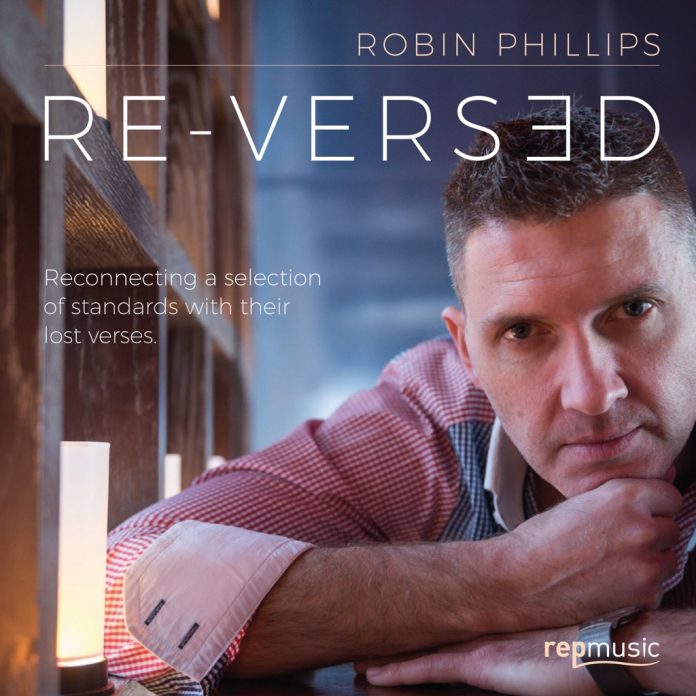 As Robin Phillips explains in his sleeve notes, he has re-versed these famous standards to include lost verses and sectional verses (introductions before the song actually starts; originally the link between spoken and sung parts in musical theatre). He has also tinkered about with the songs, mixing the order of some verses, omitting others.

Phillips shows himself to be a competent pianist with a nice touch, and in drummer Seb DeKrom and bass player Jihad Darwish he has excellent support. His vocals are expressive and although there are times when he lacks accuracy in pitch or holding a note, the songs are delivered with obvious respect for the material. Saxophonists Sammy Mayne and Brandon Allen contribute some deft asides and spirited solos (especially on Sammy Cahn & Jule Styne’s Time After Time and Fran Landesman’s Spring Can Really Hang You Up The Most).

The running time isn’t great and the set would benefit from a few more numbers or even including omitted verses – no gardenia perfume, tinkling piano or a cigarette that bears a lipstick traces on These Foolish Things, although lyricist Eric Maschwitz’s other famous song, A Nightingale Sang In Berkeley Square, is covered. It’s also good to hear the lines “Doctors once prescribed a tonic, sulphur and molasses was the dose. Didn’t help me a bit. My condition must be chronic”, which Betty Carter used to sing on Spring Can Really.

A slight disappointment is that he didn’t tip his hat to Harry Nilsson in Isham Jones & Gus Kahn’s If I Had You. (Remember Nilsson singing “I’m 5 foot 10, you’re 7-2”; and “When you stand up, your hands touch the floor”?) Having said that, there are some neat arrangements –Herman Hupfeld’s As Time Goes By is taken at a lively pace and there are interesting changes in Bronislaw Kaper & Ned Washington’s On Green Dolphin Street. Gershwin’s They Can’t Take That Away From Me interestingly is taken at 6/4 in the style of Miles Davis’ All Blues and has some lovely earthy alto saxophone.

Readers will notice my reference to composers – intentionally, to redress the balance, as this is unfortunately lacking on the sleeve, which surely must be an oversight given its raison d’être is based on their marvellous material.

Discography
Time After Time; Spring Can Really Hang You Up The Most; It Had To Be You; As Time Goes By; These Foolish Things; On Green Dolphin Street; They Can’t Take That Away From Me; A Nightingale Sang In Berkeley Square; Don’t Blame Me (43.43)
Phillips (v, p); Jihad Darwish (b); Sebastiaan de Krom (d); Sammy Mayne (as); Brandon Allen (ts). Possibly Cambridge, 2019.
Repmusic 006