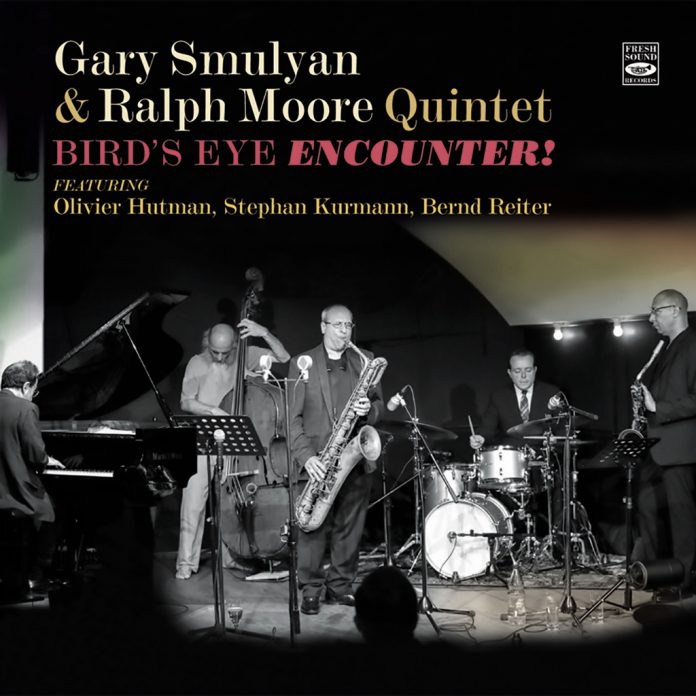 This material was recorded at the conclusion of a three-week tour which allowed the quintet to become thoroughly familiar not only with the repertoire, but also with each other.

Pepper Adams’ In And Out has been recorded just once before on the composer’s 1968 date with Zoot Sims which was also titled Encounter (OJC CD892-2). It’s a theme-less blues with an extended series of single choruses (split into four- and eight-bar sections) by Gary Smulyan, Ralph Moore and Olivier Hutman in that order. This creates an infectious tag-team effect producing a powerful momentum which climaxes with a perfunctory little riff from the saxes.

My tin ear detects some subtle little tweaks in the familiar Body And Soul harmonies which storms along as a stimulating 6/8 romp concluding with some lengthy, unaccompanied cadenzas from the horns. Both ballad features are further bows to classic songs of the 30s. Ralph Moore has a passionate, vibrato-free My Ideal all to himself and perennial poll-winner Gary Smulyan performs the lovely Old Folks with just Olivier Hutman’s sympathetic accompaniment for company. Opening in thoughtful rubato fashion he introduces a little tempo in the second chorus for one of the CD’s highlights.

Thad Jones’ Elusive is well named because even after repeated listening, I still can’t work out the chorus structure. That said, it’s an excuse for more extrovert blowing from Gary and Ralph bringing this fine CD to a swinging conclusion.

Simon Adams - 06 February 2020
Like fellow boogie-woogie pianists Meade Lux Lewis and Peter Johnson, Albert Ammons made his name at the famous From Spirituals to Swing concert organized by John Hammond in Carnegie...