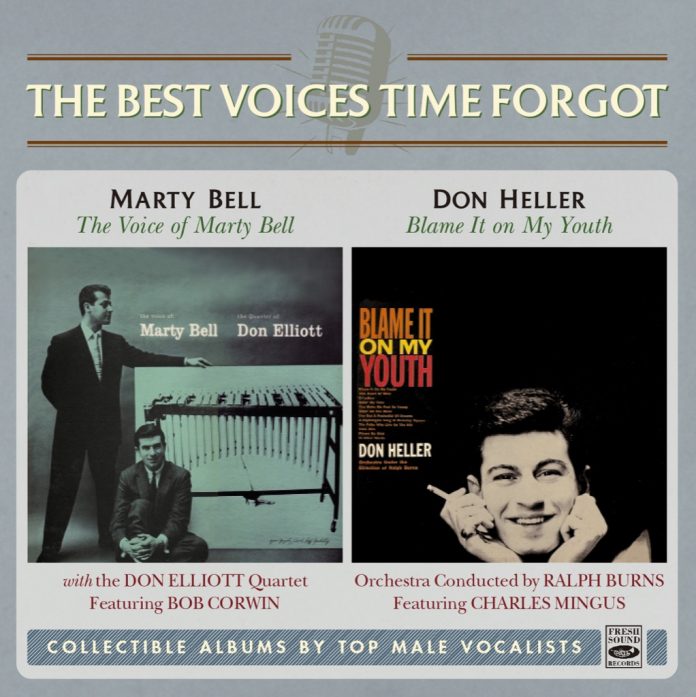 Another welcome release in The Best Voices Time Forgot series, Fresh Sound’s celebration of forgotten singers who sound too good to have suffered that fate. Both these vocalists were recorded in 1956 and did little afterwards so it’s a safe bet that Elvis Presley and the rest of the rockers and the upsurge in rock ’n’ roll in that year had something to do with it.

First up is Marty Bell, a crooner with a distinctive, rather smooth sound although this session was almost a shared leadership date with his backing group, the Don Elliott Quartet. Marty kicks off with I Didn’t Know What Time and then I Thought About You in Sinatra mode before the quartet take centre stage for an instrumental version of Moonlight In Vermont. They sound as if they had been listening to the Modern Jazz Quartet and certainly their line-up is identical. The quartet have four tracks here on their own as the singer waits in the background. Bell croons The Girl Next Door very slowly before the quartet take over and up the tempo considerably. Bell had considerable experience as a big-band vocalist prior to this recording; his voice was intimate, he could phrase well and doubtless would have become quite well known and successful had popular music moved forward a little differently. Try his eight standards for size and then consider the four Elliott pieces and ponder, as I have done, what might have been.

Much the same comments apply to Don Heller. He had a better voice although he was much closer to the Sinatra sound. He was praised by Downbeat magazine when they picked this recording as one of the most encouraging releases of 1956 but it did him little good and he was soon forgotten. Heller has 12 tracks to himself, all standards, which he interprets well with a confident, swinging approach to everything. He also benefited from some first-rate backing from the likes of Ralph Burns on piano and arrangement, George Duvivier or Charles Mingus on bass and Osie Johnson at the drums. Al Epstein provides the unusual, for jazz, backing on oboe as well as clarinet.

Overall these two releases offer superior jazz crooning backed with top instrumentalists. It just wasn’t right for the times which, ahead of Bob Dylan, were already a-changing.

Discography
(1) Didn’t Know What Time It Was; I Thought About You; Moonlight In Vermont; The Girl Next Door; According To Moyle; Suposin’; This Can’t Be Love; This Love Of Mine; I Found A New Baby; You Go To My Head; September Song; Me And You (2) Blame It On My Youth; This Heart Of Mine; Evr’y Time; Bidin’ My Time; You Make Me Feel So Young; Ridin’ On The Moon; I’ve Got A Pocketful Of Dreams; A Nightingale Sang I Berkeley Square; The Folks Who Live On The Hill; Time Was; Please Be Kind; In Other Words (70.46)
(1) Bell (v); the Don Elliott Quartet. NYC, 17 & 23 January 1956.
(2) Heller (v) with various groups including Al Epstein (o, cl); Art Ryerson, Freddie Greene (g); George Duvivier, Wendell Marshall (b); Don Lamond, Osie Johnson (d). NYC, 1956.
Fresh Sound V203

Mark Youll - 28 November 2019
Most jazz heads conversant with the 50-year-plus playing career of Chick Corea will know that from the pianist’s earliest solo recordings, through to his musings with Miles Davis, jazz-rock...