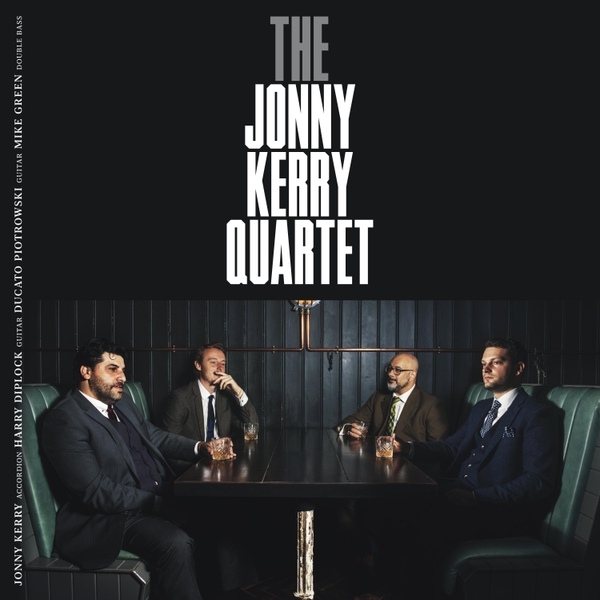 In a new release, the Jonny Kerry quartet covers the gamut of styles associated with the modern accordion, including gypsy jazz, bossa nova, tango and French musette, all the while blending them into an integrated whole peppered with pithy, perfectly executed idiomatic solos.

The quartet’s eponymously titled album features three players that match the leader for precision, fluency and expression: Harry Diplock and Ducato Piotrowski (g) and Mike Green (b). Together they play 11 tunes including Manouche, Made For Wesley, Clair De Lune and Polka Dots And Moonbeams, all delivered in pristine sound with rigorous attention to detail in performance and production.

Jonny picked up the accordion at the age of 15: “I started out in music on the piano and had regular classical lessons. I was bought an old accordion by my grandparents from auction and I was fascinated by it. I decided to pursue accordion and drop the piano as I prefer to get good at one thing rather than spread myself across multiple instruments. There are lots of musicians playing the piano and not many playing the accordion, which gave me a niche and is the reason I can play professionally. I also really like the challenge of making the accordion work in jazz”.

Unlike many younger players, Kerry had no college training. His facility and style may in part be attributed to studies with two contemporary masters of the instrument. He studied with the American player Frank Petrilli via Skype and went to Paris for guidance from the European master Richard Galliano.

The instrument is a key part of any player’s expression: “I play a wooden accordion by Victoria made in Italy. The accordion is straight tuned which gives it a modern sound and uses a cassotto chamber which sends the sound of the reeds through a wooden tone chamber which gives a smooth sound almost like a clarinet”.

Kerry has performed at hundreds of events around Europe. His playing features in the BBC period drama Peaky Blinders, and he has recorded for Warner records. He counts among his inspirations Richard Galliano, Frank Marrocco and Astor Piazzolla plus “all the obvious jazz masters such as Charlie Parker, John Coltrane etc. For singing my main inspirations are Matt Monro and Frank Sinatra”.

The quartet play a short tour in November and shouldn’t be missed if you’re near (or far). Dates are at jonnykerry.com/concerts.html

Click here to find out more about the Jonny Kerry Quartet

This article was produced with the assistance of the artist.