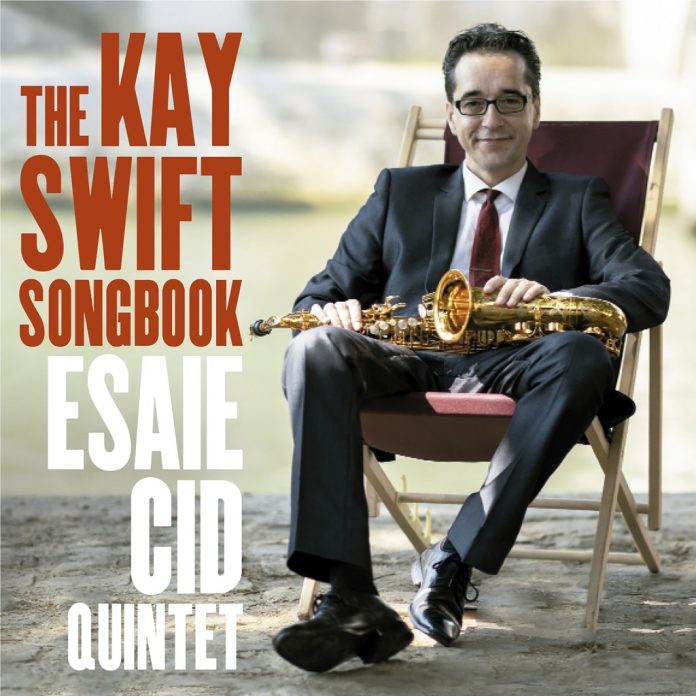 Anybody heard of Kay Swift? Me neither but apparently she was quite big back in the 30s, chiefly for her romance with George Gershwin although she was also the first woman to write a score for a Broadway musical – Fine And Dandy, in 1930.

Best known of the 11 titles here will be Can’t We Be Friends, which did become a standard and was even recorded together by Louis Armstrong and Ella Fitzgerald. Many of the other selections will likely be obscure to most people but the Esaie Cid Quintet does a good job in presenting them, in bop mode for the most part. One Last Look, however, is a slow ballad that finds the altoist leader in rhapsodic mood with sultry trombone contributions from Jerry Edwards. It’s an attractive melody and Cid makes the most of it with a smooth, slowly twisting and turning alto solo.

Guitarist Rea is the only chordal member of the rhythm section but he also makes himself quite prominent as a soloist. Can This Be Love is at lightning tempo and one of the real boppish pieces on offer. Cid’s skilled and inventive solo never wavers for a second even at an impossible tempo. Swiftin,’ another show tune, has a blues feel about it, particularly from Rea’s downhome guitar solo. Cid’s alto shines again on this one too and, not to be outdone, Edwards turns in a shapely trombone segment.

Cid’s arrangement of Can’t We Be Friends, as with all of these songs, is distinctive and lends itself well to a jazz interpretation. Taken at a brisk tempo it features strong all round solo work from the horns and Rea as the rhythm section provide a brisk backing. The unlikely titled Let’s Go Eat Worms In The Garden turns out to be a slow ballad with gently whimsical alto and blues-based guitar.

Most of these compositions show Ms Swift to have been a gifted composer of show tunes which makes me wonder why she is almost forgotten today. It is not as though she lacked friends in high places!

The Cid band are a tightly knit unit with good soloists, not least the leader himself and the music, once you become acquainted with it, is attractive and offers clean, original jazz performances.

Discography
Once You Find Your Guy; When You Hear This Music; Nobody Breaks My Heart; Fine And Dandy; One Last Look; Can This Be Love; Swiftin’; Can’t We Be Friends; Whistling In The Dark; Let’s Go Eat Worms In The Garden; Sagebrush Lullaby (48.29)
Cid (as); Jerry Edwards (tb); Gilles Rea (elg); Samuel Hubert (b); Mourad Bennhammou (d). France, 14 May 2018.
Swing Alley 039

John Adcock - 18 January 2020
Shared experience with Steely Dan is a common thread in this wonderfully engaging album from pianist Jim Beard and guitarist Jon Herington. Both musicians have an impressive pedigree in...