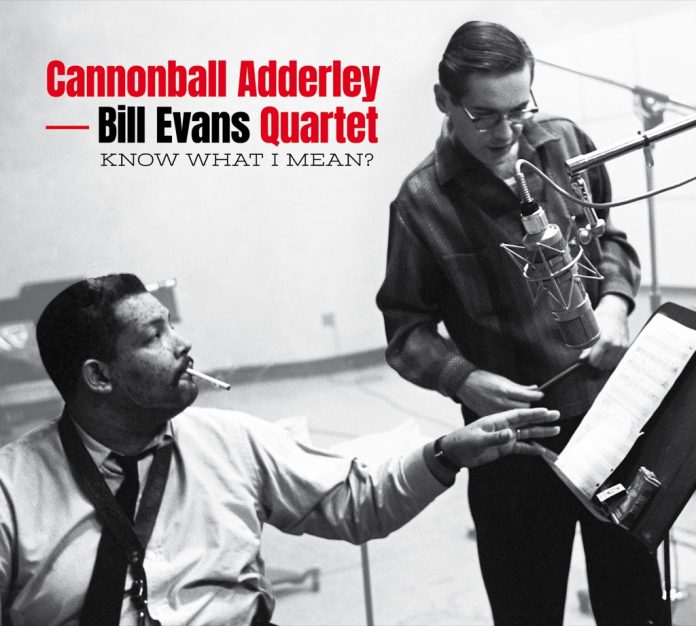 Riverside’s Know What I Mean? was released in 1962 but the album seems to have escaped the attention it warrants. Its cover at the time announced “Cannonball Adderley” in large typeface while beneath in small letters it murmured “with Bill Evans”. There was no indication that the two artists might be co-leaders of a quartet. Indeed the word “quartet” wasn’t even mentioned. A re-evaluation of the collaboration involved now appears to be taking place and it’s reflected in the title of this CD version which justifiably places both artists on a par. Their quartet is completed by Percy Heath on bass and Connie Kay on drums – half the MJQ no less.

Evans had previously participated in two of Adderley’s albums – Portrait of Cannonball and Jump For Joy in 1958 and they’d played together in Miles Davis’s sextet which recorded Kind Of Blue in 1959. Know What I Mean? unveils the happy alliance that existed between the two musicians.

Adderly is clearly enjoying himself – his playing is relaxed with the occasional fiery riff – and Evans has bags of room to solo in. He’s more active here than with his classic trio. Heath and Kay prompt and encourage the other two and never overshadow with their own technique. The album’s mix is spot on and it enables the listener to be centre stage in the proceedings.

Evans wrote the modal title track and the rhythmic Waltz For Debby. The other numbers are by Gordon Jenkins, George Gershwin, John Lewis, Clifford Jordan, Earl Zindars and Jimmy Van Heusen. Toy is bright and airy. Venice has soft, precise playing with Heath supplying richly toned bass. Goodbye is poignant. To my mind, Elsa doesn’t quite hold together but the bonus eponymous track from the Evans trio more than makes up for this. Who Cares is invigorating and Nancy is pensive with creamy sax.

Adderley hadn’t recorded any of these songs before and would never do so again. His stated goal regarding his part in the album was to reach a point closer to Evans’s lyricism than to his own ebullient blues and bebop and in this regard he more than succeeded.

As well as alternate takes, the CD has Evans’s 1956 solo piano recording of Waltz For Debby; Elsa by the Evans, LaFaro and Motian trio from 1961 and Goodbye from Evans, Monty Budwig and Shelly Manne in 1962.

Andy Hamilton - 09 September 2020
I'm still havering. I was inclined to say "Not pulling me in", and to make comparisons with the rather formulaic Sunnyside or Criss Cross releases from earlier in my...