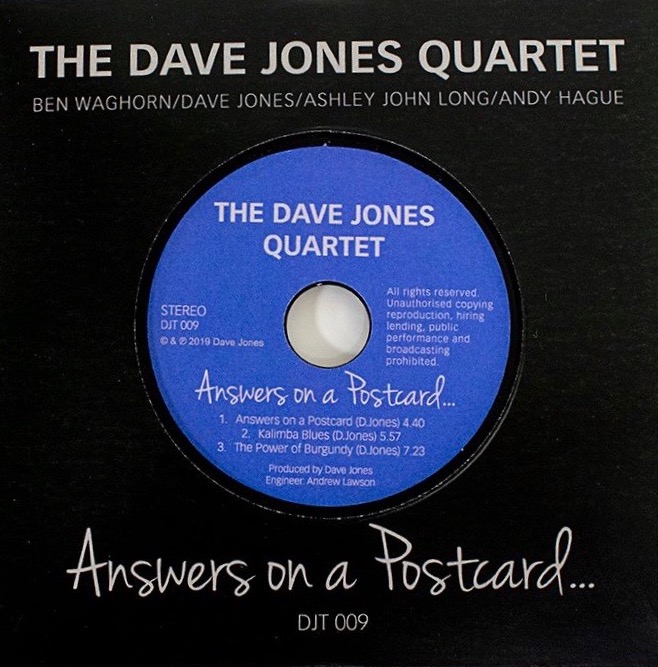 I always enjoy – and learn much from – the JJ posts of the widely experienced Dave Jones. And I’ve very much enjoyed the releases from this fine post-Tyner, Evans-aware pianist and composer which I’ve had the pleasure of hearing, such as his work with the folk-touched Burum group and that ensemble’s association with leading Indian musicians in the Khamira project. The good news continues here, in this finger-snapping, blues-shot session of new Jones pieces. Released at EP length, it’s a follow-up to this quartet’s critically well-received Keynotes album of 2017, which featured notes by sometime Jones associate Simon Spillett.

The group sounds ultra-tight, the grooves are deep and mellow – relish the snap and bounce of the opening Answers, with its crisp and cascading figures from the leader – and the playing is top notch, with Hague’s drumming spot-on throughout. Featured on the title track and Kalimba Blues, Waghorn’s tenor is in the post-Dexter vein – the one marked round, full and fluid, with plenty, plenty soul. His flute sings and flies on Burgundy, where Jones comes on strong and Long has a delicious pizzicato spot.

Jones’s music can evince a world-ranging literacy and on the gorgeously sprung Kalimba Blues the laid-back opening kalimba loop supplies a typical touch of refreshing atmosphere and colour to music soaked in archetypal, modally turned modern mainstream values – and where Long has another tasty outing, this time on vibraphone.

As we know, jazz can mean many things to many people. But if you’re after the marrow of the music, look no further. As our editor wrote of Jones in JJ 11/12, here are “swinging post-Blue Note tunes that are exemplars of musical logic, integrity and effective variation”. Relish this joyous, deeply affirmative EP – as I have – again and again. And again!