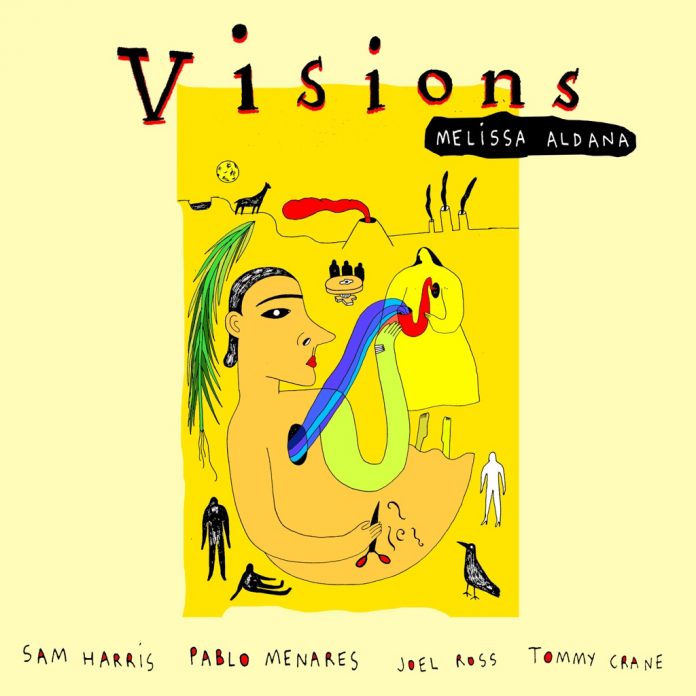 There have been numerous links between jazz and fine art, from the 20s up to more recently – Ted Nash’s Portrait In Seven Shades and Tim Whitehead’s Turner-inspired Colour Beginnings spring to mind. In the same vein comes Melissa Aldana’s Visions, paying homage to the life and work of Freda Kahlo. Born in Chile, Aldana relocated to New York where she studied under George Coleman and very soon started to establish herself. She is a strong and confident player and these qualities are reflected in this album. The music, as she states, “deals with challenging questions that bubbled up while I was immersed in Kahlo’s paintings … her professional life and personal struggles”.

This album is an impressive and assured piece of work with much to be admired. Tight arrangements and the opportunity for individual expression are evident, often interrupted by changes of pace and direction, creating drama and intensity. Sounds and textures are overlaid, like the shapes and forms in Kahlo’s illustrative work, full of personal references.

La Medina has a dance-like start (elements of tango are never far from the surface on several of the tracks), which changes tempo to give a meditative effect, like the spaces in a painting, before continuing and picking up pace again. As Aldana describes it, “layers of tension and resolution”. The track is notable for the melodic bass of Menares, supported by Sam Harris’s chordal piano and busy, chattering drums.

Themes are developed logically and quite formally but open up possibilities for freer-form playing and periods of more extended improvisation. She is not afraid of using established jazz constructs and the beginning of the Evans/Livingston ballad Never Let Me Go is a case in point – reminiscent of a Rollins-style introductory cadence – followed by some resonant lower-register work and a solo of near perfect beauty, worth the price for this track alone.

Her upper-register work elsewhere is controlled and with an airiness which gives the music space, and the other musicians respond accordingly. Joel Ross’s vibes are featured in The Search and have a sharply defined, percussive tone, not dissimilar to Bobby Hutcherson’s work in the 60s, especially when in tandem with the piano.

Drummer Tommy Crane is busily supportive throughout and deals with tempo changes effectively – on El Castillo he quickly builds a foundation once the tempo increases, chopping and changing with great urgency and dexterity.

Derek Ansell - 10 March 2020
Melting Pot was the last LP to feature the original line up of the M.G.s and they managed to end on a high note with an album of the...