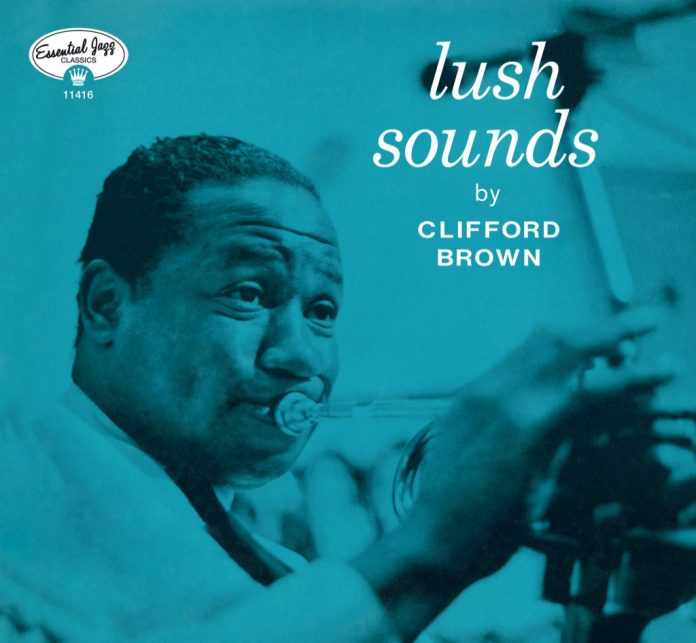 After his successful 1954 sojourn in California where he formed the quintet he co-led with Max Roach, Clifford Brown returned to the east where the group played their first engagement in November that year at the Blue Note in Philadelphia. Because of the quintet’s numerous recordings in Los Angeles, Emarcy decided to showcase their star trumpeter in some different settings; thus in December he performed on a Sarah Vaughan album which was followed four days later by a session with Helen Merrill.

In January 1955 he recorded Clifford Brown With Strings, which was to become his biggest selling LP. Lush Sounds reproduces that album, with some extra tracks. Wynton Marsalis has said that With Strings was the album that encouraged him to take up the trumpet at the age of 12. The rhythm section included Richie Powell and George Morrow – colleagues from his quintet with Max Roach – together with Max himself and Barry Galbraith who had been on the Merrill date. Barry was the go-to guitarist for studio dates in those days (over 600 recordings in Tom Lord’s jazz discography) and Neal Hefti, who was a trumpeter himself, provided the string arrangements.

My guess is that Hefti’s scores did not indicate exactly what, but where the great man was to play. Sticking close to the melodies he was free to interpret these classic songs in his own distinctive way, making elaborate use of embellishments and delicate grace notes with a more pronounced vibrato than usual. It goes without saying that his full, rich sound is a thing of beauty throughout his range but especially in the lower register here which he uses to such good effect.

EJC has included some additional titles with Gigi Gryce and Lou Donaldson which are more representative of the contexts in which he usually worked.

Fifteen months after With Strings the jazz world was rocked with the news that Brown had been killed in a car crash. Dizzy Gillespie said at the time ”Jazz was dealt a lethal blow by the death of Clifford Brown … there can be no replacement for his artistry”.

Steve Voce - 22 May 2022
It seems odd to tie jazz to a building, and surely the works of no other musician could produce four full CDs of classic music from it (well, Goodman...