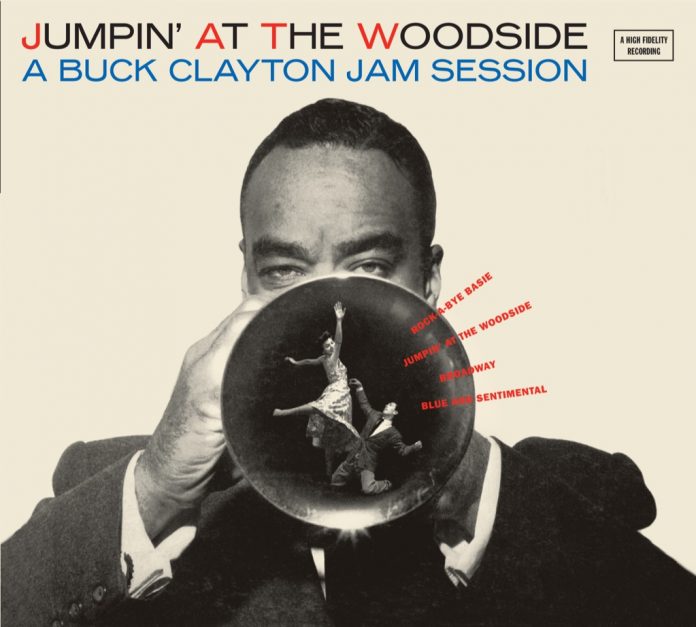 Jumpin’ At The Woodside and bonus album The Huckle-buck And Robbins’ Nest were two of a series of Columbia jam sessions in the mid-50s featuring Buck Clayton. The title album was a tribute to Count Basie , Buck’s boss for many years.

LPs were now established, and extended tape recording, with the availability of splicing and editing, had replaced recording on to discs. John Hammond and George Avakian collaborated in a new concept offering extended room for soloists to stretch out in unrehearsed improvisation.

Tracks could last the length of an LP side. (The Huckle-buck has 63 choruses, plus trimmings and lasts for 20 minutes.) The creativity, swing and rapport of the best mainstream soloists available was essential to counter the likelihood of boredom or sloppiness in these lengthy performances. And the talented artists here certainly rose to the occasion.

It’s worth reflecting that this new freedom of space for soloists could however be threatened by the subsequent censorship of any ill-judged assessment in editing and splicing. That doesn’t seem to have happened here. Jumpin’ At The Woodside used an incomplete take from an earlier session (with Woody Herman sitting in) which roared along splendidly but unfortunately fell apart at the end. Intersplicing from an alternative take in August 1954 supplied effective repair work, (including a replacement ending) even with a different rhythm section!

The marathon Huckle-buck swings at a comfortable loping tempo, a one-take affair, to be greeted at the end by delighted cheers from the invited studio audience. Blue And Sentimental, the shortest track (at 6.41) is a beautifully performed tribute from Coleman Hawkins to Herschel Evans. Robbins’ Nest, edited from two takes, completes an album of magnificent mainstream from the finest practitioners of the day. Truly classic jazz.