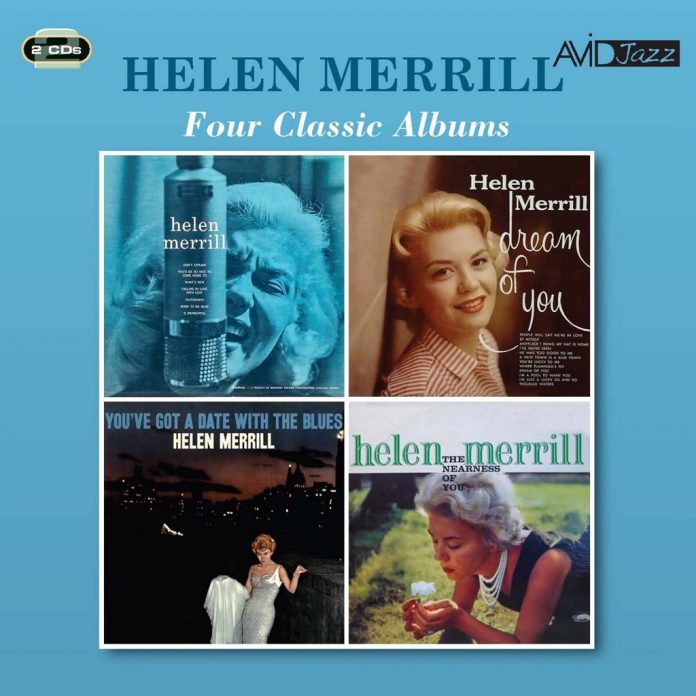 In 2006, when the eighth edition of the Penguin Guide To Jazz Recordings came out (this was the last edition Richard Cook was able to work on before illness stalled him), the Helen Merrill discography was in a parlous and faintly perverse state. The only things that were available were an Emarcy compilation of early material whose reissue was presumably endorsed by the marketable presence of Clifford Brown and Gil Evans, a Brownie tribute on the same label and a marvellous but improbable 1986 collaboration with Steve Lacy and Stéphane Grappelli (though not on the same tracks) and her favourite accompanist Gordon Beck; the only other Merrill in the browsers was the 2002 Lilac Wine, recorded in Prague with Lew Soloff, husband Torrie Zito, son (from another marriage) Alan Merrill, who more or less pioneered the pop term “big in Japan” and George Mraz.

Slim pickings from a long career of consistent artistic quality. Things are a bit better now, and better still with this budget option, but Merrill still doesn’t make her way into many lists of major female jazz singers. Her smoky, Julie London-like delivery perhaps banks down critical recognition, but it also disguises the subtlety and musicality of her performances, which always sound thoughtful, perhaps even troubled and without what we described in 2006 as the “exaggerated pathos” of Billie Holiday on something like Don’t Explain.

That’s the lead-off track here, taken from the 1954 set with the Brown sextet. What’s New is the other outstanding track, one of the best in the whole jazz singing canon, in my view at least. Quincy Jones’s arrangements are instinctive and open, allowing Merrill to explore the material rather than simply act it out. That’s also evident in Gil Evans’ charts for her on the 1956 material. For all its short span, People Will Say We’re In Love is done without a speck of coyness or coquetry; it’s actually quite a troubling rendition.

The slightly later material will be less well known. Avid have put The Nearness Of You and You’ve Got A Date With The Blues out of chronological sequence. A sequence from Ellington’s Black, Brown And Beige is sufficient to show how distinctively she approached blues material, again without superadded pathos and with devoted attention to the construction of the line. She actually reminds you that blue is a colour. There’s some more Ellington further on, done in French, like a couple of the tracks.

Then comes the 1957/58 LP The Nearness Of You, which is Merrill at her most languid and unswinging, which is maybe why it comes last, though it’s far from filler. In fact, it’s probably one of the better places to start if you know nothing of this astonishing singer. The voice has the capacity to make men flush and then grow pale. There is always an undercurrent of uncertainty, not of diction or musical direction, but in the narrative she is spinning, which as we’ve observed before often has the air of a woman sharing a particularly difficult confidence. Unique and, once experienced, strangely addictive, Merrill deserves a thorough reassessment and this is an excellent place to start.

Thomas Fletcher - 18 September 2021
When I first heard that Snorre Kirk was releasing another album with Stephen Riley after the success brought by Tangerine Rhapsody, I knew that something special was due. Unlike...