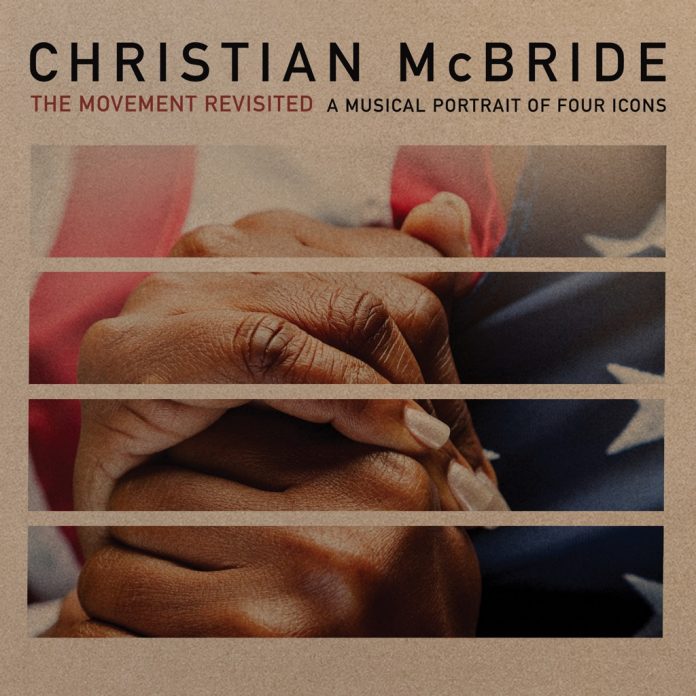 When he started out composing The Movement Revisited, Christian McBride intended it to be a “musical portrait of the civil rights movement”. Not for a minute did he understand that the radicalism of the Nation of Islam and the political stance of Muhammad Ali were quite different from the non-violence of Rosa Parks and Martin Luther King. So rather than offend his elders by “wrongly suggesting I passionately knew what the nuts and bolts of the civil rights movement was all about”, he eventually reworked this piece as simply a musical portrait of four icons that had touched him deeply on a personal level. What he finally created was an evocation of the spirit and feeling of the civil rights movement rather than its detailed history.

The Movement Revisited started out in 1998 as a commission from the Portland (Maine) Arts Society, using McBride’s quartet and a choir, with four of its members acting as narrators for the four featured icons. J D Steele came in as orchestrator and choral arranger, and the piece was performed four times. In 2008, in his third season as the Los Angeles Philharmonic’s Creative Chair for Jazz, McBride got the chance to rework the piece for a big band. The election later that year of Barack Obama as America’s first black president prompted him to write a new fifth movement as a fitting conclusion to the narrative. The completed work was first performed in 2010 and eventually recorded in 2013, but only now makes its appearance on CD.

The Movement Revisited alternates between accompanied spoken word passages and big-band and choral musical portraits. The spoken word passages are narrated by actors, which mean they lose some of the force of their original orators, but their words still resonate powerfully. However, the musical portraits work well, Sister Rosa a gentle swing, Brother Malcolm a powerful vocal tribute from Alicia Olatuja with choral support. Muhammad Ali gets a loud, playful, funky outing in Rumble In The Jungle, Barack Obama plays out in Apotheosis with the best jazz of the album.

However, the portrait of King in Soldiers (I Have A Dream) is too melodramatic and martial, more film soundtrack than evocative portrait. And it is this track that shows up the problems of this work, for McBride’s undoubted respect for his four icons does not translate easily into a coherent whole. The Movement Revisited comes out more like a soundtrack to a political musical rather than a consistent exposition, a work best heard live rather than at a distance through a recording. It is fair to point out that in the sleeve notes, McBride recognises these criticisms. He notes that Harry Belafonte – who spoke the words of his friend Martin Luther King at a performance in Maryland in 2013 – was particularly critical of the jagged changes in musical timbre and indeed the very use of the word ‘revisited’ in the title. For him King represented something qualitatively different from Malcolm X, and criticised the musical aesthetics and political choices McBride had displayed. I think those criticisms are valid, for much as one wants to like this piece, I for one do so for its politics and intent rather than for its musical content.

John Adcock - 21 November 2020
The Cotswolds seem far removed from the hustle and bustle of Latin jazz music, but the location has clearly been a wonderful inspiration on this debut album from UK-based...