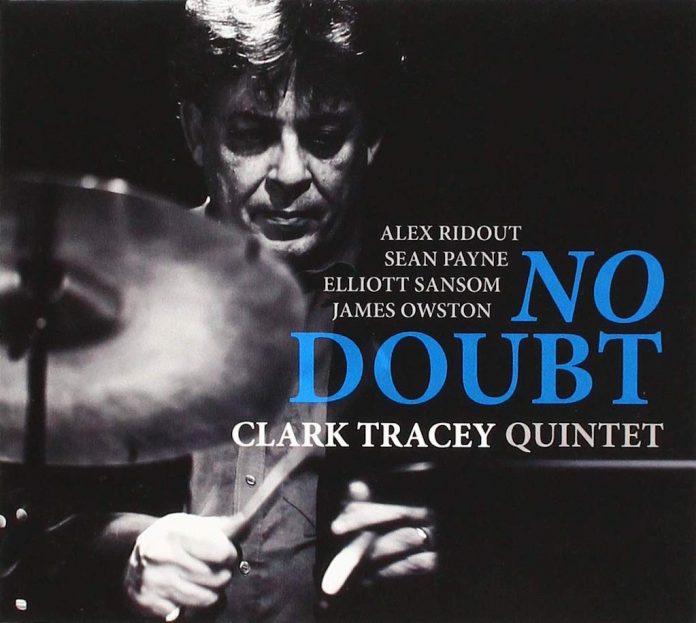 For 35 years, Clark Tracey delivered the rhythmic powerhouse for his late father Stan’s various ensembles. But in tandem with these duties he’s been leading his own bands for over 30 of those years and has released over a dozen albums under his own name. He’s now, quite rightly, regarded as one of Britain’s best jazz drummers.

Not surprisingly, Tracey won top place in the drummer section of the British Jazz Awards 2017. Indeed, as if to consolidate these acclamations, the Penguin Guide To Jazz Recordings (9th edition) stated: “The younger Tracey … developed into a failsafe and superbly accomplished drummer in a tough, straight-ahead style”. But 11 years on from that description, the straight-ahead style is now somewhat redundant since Tracey’s abilities extend to a broad spectrum of jazz.

Take, for example, Kenny Wheeler’s ne plus ultra composition, Foxy Trot. Anyone who includes this magnificent number on their album deserves unreserved praise both in terms of the choice of music and its execution. As heard here it’s afforded a satisfyingly elegant, super-confident reading, as realized by Alex(andra) Ridout on flugelhorn.

But this quintet can handle less contemporary pieces too, such as Duke Ellington’s The Star-Crossed Lovers (aka Pretty Girl) from Such Sweet Thunder (Columbia, 1957) where the teenage Sean Payne evinces a remarkably sensitive alto solo, but wisely resists the temptation to emulate Johnny Hodges’ trademark glissandi.

Don Grolnick’s Pools, from Hearts And Numbers (Hip Pocket Records, 1985) is given a more acoustic treatment than the original but is no less powerful for that; check out James Owston’s resonant bass solo and likewise Elliott Sansom’s assured piano outing. The closer is Ridout’s exuberant composition, Top Dog, and at 13 minutes, the longest number on the album, which allows ample opportunity for stretching out, with a jubilant blues-infused solo from Ridout herself.

Another key aspect of this album is Tracey’s choice of bandmates, including Ridout, coincidentally another winner of the aforementioned British Jazz Awards where in 2018 she was placed top in the Rising Stars category. Crucially, aside from Tracey, all the members of the quintet have been finalists in the biennial BBC Young Jazz Musician awards. Altoist Payne appeared in the YJM’s in 2014 aged just 13 whilst Ridout and pianist Sansom featured in the 2016 awards and bassist Owston was a finalist in 2018.

In choosing youthful musicians, Tracey follows something of a tradition in the nurturing and promoting of the latest jazz talent and importantly, affording them the all-important exposure to audiences they so richly deserve. Even the lively opening track on the album, The Prince, spotlight’s Payne’s not inconsiderable writing ability.

Tracey demonstrates he’s a true leader, but without pulling any punches, he’s never tempted to showboat here. Rather, he altruistically allows his colleagues to take the limelight, his subtle drumming nevertheless providing the essential backbone and cohesive driving force behind the ensemble.

Dave Jones - 17 April 2019
On his Edition Records debut the range of Potter's musical prowess is stretched somewhat, because besides his usual tenor-playing he’s also on soprano, clarinet, flute, and sampler, from which...