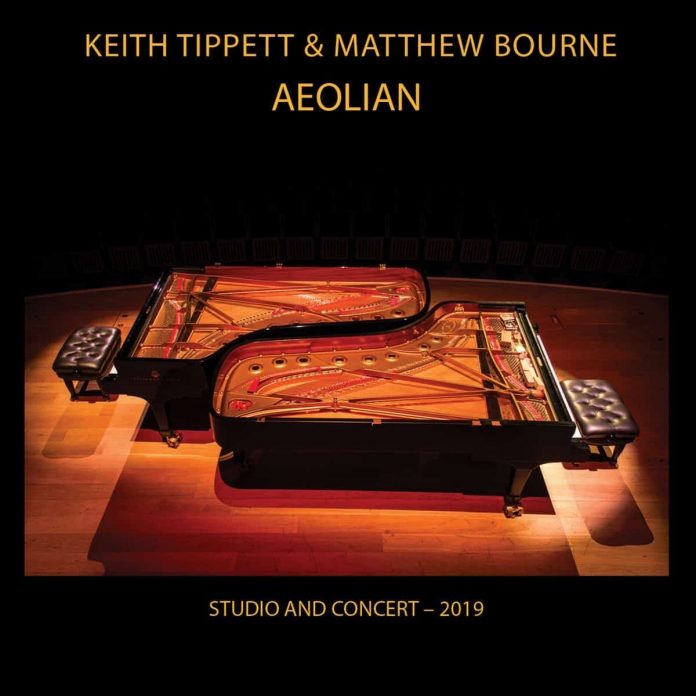 At Keith Tippett’s invitation, Matthew Bourne first paired up with him in 2016, the duo performing live for the first time at the London Jazz Festival in 2017. Almost all the music they made together was documented on audio and film, the most memorable moments of which appear on this double CD set. The first CD is a studio set from Leeds, the second a live set from London; both date from 2019.

The eight shorter pieces on the Leeds set show well how the two pianists interact, their equally percussive styles nevertheless leaving the other plenty of space for manoeuvre. They also develop a widely varied palette of sounds and effects that they put to consistently creative use.

The opening Etesians is hard and combative, while in Buran, the two circle each other with great respect, coaxing out gentle melodies and lullaby-like refrains that slowly develop a harder edge. In contrast, Brickfielder is flurry of cascading notes and heavy chordal interventions while Sirocco conjures up a proverbial blast of virtuosic performance.

Bise is full of empty space, quiet interventions inside the piano lid and high-register keyboard notes creating an eerie soundscape that gradually builds up a repetitive momentum. Of all the pieces, Bora is the most abstract, dark, rolling arpeggios matched by an internal sawing at the strings that combine to chilling effect. Samoon ends the duos in almost romantic fashion, the two pianists waltzing together warily, while the brief Tippett solo Something I Made Up is nostalgic in its reverie.

The continuous live set from the echoing Union Chapel starts slowly, once again the pianists getting to know each other. And then it menacingly opens up as torrents of notes pour down before more angular, aggressive passages appear that in turn give way to bowed notes and percussive noises from Keith that usher in a beautiful melody of delicate precision.

What stands out here, as on the studio set, is that while the music threatens towards the atonal and dissonant, the two just about remain within harmonic bounds, creating a harsh, multi-faceted beauty that is compelling to listen to. But it is also poignant, for the live performance was Keith’s last public appearance, as he died in June 2020. This is a magisterial way to remember him.