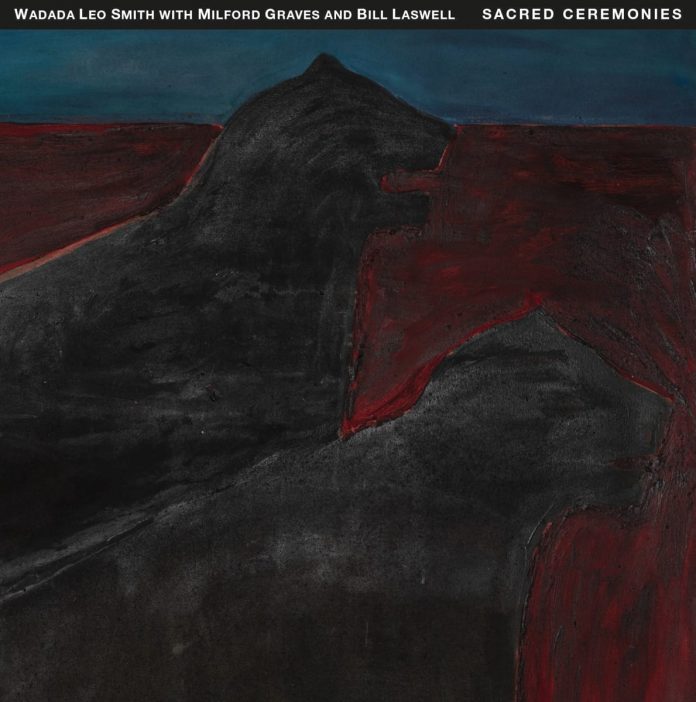 Some avant-garde music stays avant-garde. Bop was avant-garde, now it’s not. The sort of music 79-year-old trumpeter Wadada Leo Smith and one of his two confrères on this three-CD boxed set were playing in their 20s was, in aesthetic terms, as contemporary as it still remains. They and musicians like them carry on up the slope, shoulders to the wheel, deaf to denunciation and rejecting ridicule.

That the colleague referred to here, 80-year-old drummer and percussionist Milford Graves, has since died of a heart condition might stand as testimony to the heroic nature of their commitment. The third band member, bassist Bill Laswell ( a youngster at 65), if not as free a free jazzer as Smith and Graves have been, was nevertheless immersed in New York’s 1970s culture of rock-influenced experimentation.

What constitutes the ridiculous, of course, is always a matter of personal taste. The staying power of these musicians might be enough to persuade a detractor that they were on to something, and in the set’s title, Sacred Ceremonies, is enshrined the occasional solemn business of what they were about. The set comprises a duo CD by Smith and Graves, a second duo featuring Smith and Laswell, and a third CD of the three together. Sacred Ceremonies is dedicated to Graves’s memory and includes formal compositions by Smith, and others conceived by all three in Laswell’s New Jersey recording studio.

At 174 minutes, the set is also a monument of Mount Rushmore proportions to free improv. Smith, as a first-generation member of Chicago’s Association for the Advancement of Creative Musicians (AACM), can stand with Anthony Braxton and others, including Graves (who worked with Albert Ayler, Paul Bley and Don Pullen), as representative. His style throughout the set is typically open-horn and proclamatory. One might say declamatory if the chart titles did not allude to some extra-musical message.

The trio’s Myths Of Civilisations And Revolutions rumbles out of a Gravesian background from the depths to which Laswell’s bass is an adjunct and Smith’s seemingly random phrases at high altitude like bulletins fired into the ether. At least The Healer’s Direct Energy is direct and energetic, though a healer’s protocols might require a quieter, more considered treatment. The tone in Ruby Red Largo – A Sonnet is more meditative and gives Laswell the opportunity for some self-referential electro-invention and drummer Graves time to exercise his credentials as percussionist.

The problem, as always, is not so much lack of structure as lack of form. Starting off, taking a break and ending are structural, albeit apparently unplanned. They are not patterns, which are essential to form and require discipline and obedience: repeats, for example. But Smith & Co would argue that such conformity is foreign to the spirit of free expression. One turns to Baby Dodds In Congo Square, by the Smith/Graves pairing, for an illustration of its titular subject, only to discover formality, however skewed. Smith’s announcements have an al fresco feel, as if they were public addresses from the eponymous square itself. The tone alters as he fixes the Harmon mute before a final minute or so of open-horn. Tertiary form? Hardly, but it makes for variety. Once more, Graves’s wall of low reverberations sounds Eastern, almost mystical. The elegiac character of The Poet: Play Ebony, Play Ivory (for the writer Henry Dumas) is enhanced by his hypnotic tapped cymbal.

The Smith and Laswell pairing finds Smith’s duo partner determined to subvert the idea that only two musicians are playing, more than Graves can do in his apparent determination to establish an otherworldly mood. On Ascending The Sacred Waterfall – A Ceremonial Practice, Laswell scours his resources to provide much more colour for Smith’s ringing contributions. Laswell’s riff on Prince – The Blue Diamond Spirit is countered by a separate and higher-pitched bass line. Smith feeds off this as Laswell’s sonorities do in response to Smith’s greater truculence later on.

Sacred Ceremonies will probably confirm sceptics of free jazz in their prejudices, and the fancy titles may reinforce them; for others, its intensities and mutual communing will signify an important summary of achievement.

Peter Gamble - 09 July 2022
This live recording came just prior to the sextet’s journey to Europe for the Juan-Les-Pins Jazz Festival, an historic sojourn which found the musicians based in Europe thereafter, escaping...