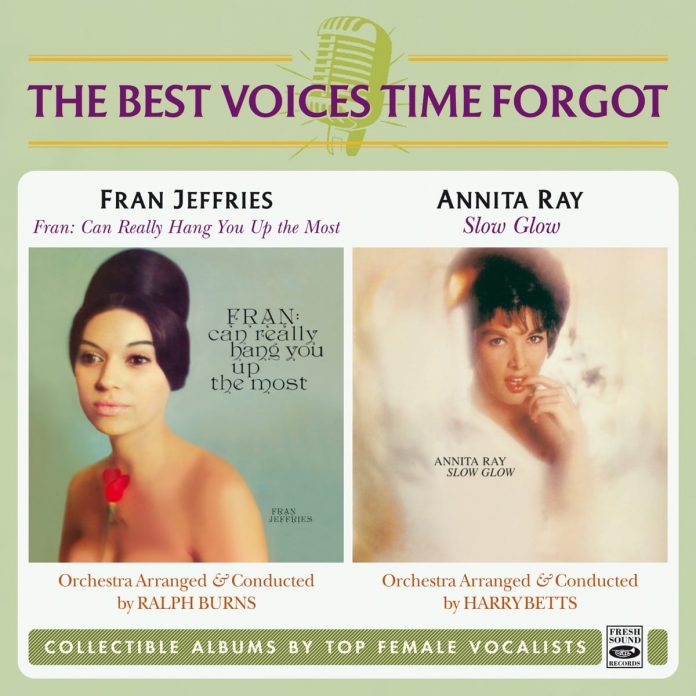 Fran Jeffries is indeed a forgotten figure today – apart, that is, from a memorable scene in the 1963 Pink Panther film that introduced Peter Sellers’ Inspector Clouseau character and in which she performs Meglio Stasera, a.k.a. It Had Better Be Tonight.

For just over three minutes she dances and sings Henry Mancini’s attractive Latin-inspired number while the audience and cast members David Niven, Robert Wagner and Sellers himself can’t manage to take their eyes off her. It can be found on YouTube.

She is featured here with a Ralph Burns orchestra performing fairly run-of-the-mill charts. The repertoire though is well chosen, including It Had Better Be Tonight with some overlooked gems like Isn’t It A Pity, No Moon At All, April Song and especially the classic Spring Can Really Hang You Up The Most. With her perfect diction she makes the most of Fran Landesman’s hip lyric, handling the subtle modulation at the end of the chorus with aplomb.

In 1967 a Valley Times columnist claimed that Annita Ray was “the best singer who has not yet become famous” which on the evidence of this, her only album, seems accurate.

It was recorded a year after she had been appearing with Ray Anthony at the Sahara Hotel in Las Vegas but there is very little here to interest the readers of Jazz Journal. Slow Glow is an after-hours album of intimate torch songs with tempos rarely creeping above leisurely so attention does begin to wander. Variety in the material would have resulted in a far more enjoyable listening experience. That said, her delicate delivery has a certain charm, calling to mind some of Julie London’s work.

Matthew Wright - 10 November 2019
Barb Jungr is a singer who has a large following and who has enjoyed widespread critical acclaim, although it has been said that her recordings often lack the immediacy...