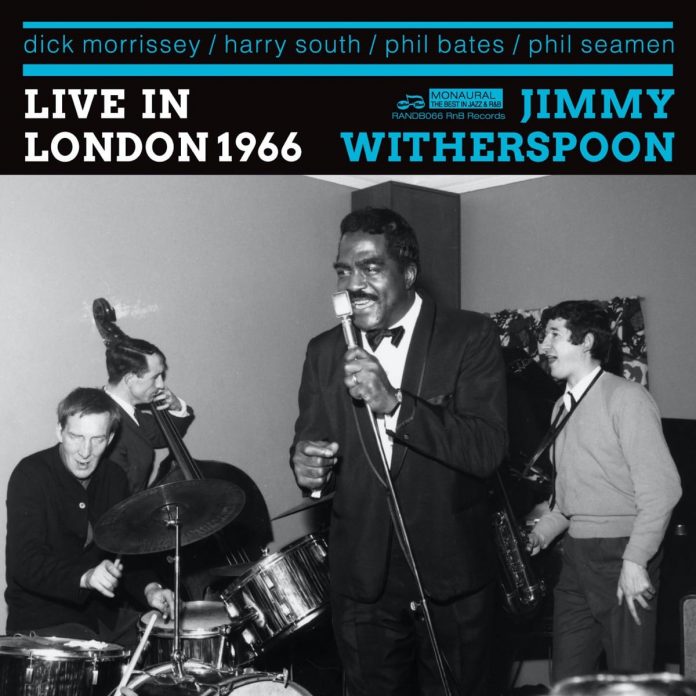 These performances bring back happy memories because in 1966 I was working with the Deakin Lewis Soul Band which opened for Jimmy Witherspoon at Twickenham’s famous Eel Pie Island Hotel. Dick Morrissey was with him that night and the Internet reveals the star of the show was paid £80.00.

Our seven-piece group apparently shared £10 – happy days! Just like his contemporary Joe Williams, his earthy baritone was rooted in the rich Joe Turner tradition and his powerful stage presence left a lasting impression on a packed audience.

He gets a foot-tapping groove here on staples like Kansas City, St. Louis Blues, I Gotta Girl and his own inimitable Times Getting Tougher Than Tough. A welcome change of pace is achieved on ballads like Trouble In Mind, Sweet Lotus Blossom and especially Percy Mayfield’s Please Send Me Someone To Love which receives a particularly tender reading.

As usual on live performances he gives extensive solo space to his accompanying horns – Dick Morrissey and Peter King. 1966 was the year Morrissey came second to Tubby Hayes in a Melody Maker poll and his booting Stanley Turrentine/Johnny Griffin approach is a perfect fit for the hard-swinging drive Witherspoon creates.

These titles are making their first appearance on CD. The King tracks have never been available commercially before and they show just how well his great ideas could transfer from the alto to the tenor. 1966 was also the year Witherspoon was recorded at Ronnie Scott’s together with the house tenor himself. (available on Harkitt CD8065).

Peter Gamble - 30 September 2019
Tribute is an atmospheric album without any indication as to who the tribute refers to but is certainly typical of Motian’s experimental groups of the time. The drummer had a...