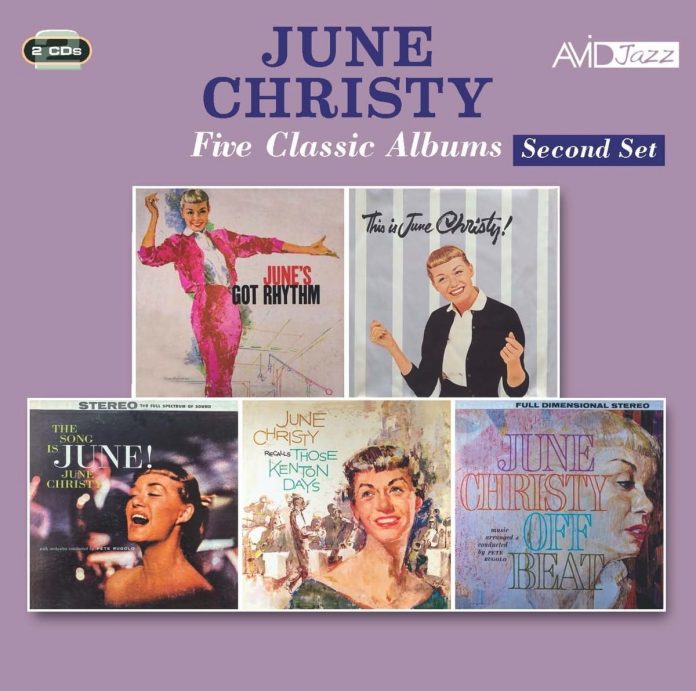 June Christy, born Shirley Luster in 1925 in Springfield, Illinois, was one of the great vocalists of cool jazz, and – I’d argue – one of the greatest in the history of the music. She replaced Anita O’Day in the Stan Kenton Orchestra in 1945, and had a hit with the million-selling Tampico, Kenton’s biggest-selling record. From 1947, as well as working and recording with Kenton, she began making her own records, mostly with arranger and bandleader Pete Rugolo. However, she remains neglected compared to contemporaries such as Ella Fitzgerald and Frank Sinatra.

This is Christy’s second collection on Avid. The first featured her best-known album, Something Cool, recorded in 1954 with Rugolo and his orchestra, which Christy later described as “the only thing I’ve recorded that I’m not unhappy with”. Its chart success, along with that of The Misty Miss Christy, helped launch the vocal cool movement of the 1950s.

This second Avid two-CD set features five albums recorded 1958-60 – June’s Got Rhythm, This Is June Christy, The Song Is June, Those Kenton Days and Off Beat. Pete Rugolo arranges on four; the fifth, June’s Got Rhythm, is arranged by Christy’s husband Bob Cooper, who also plays tenor sax and oboe. There are excellent musicians featured, and the orchestrations are inventive, though often with irritating devices found in the light music of the day.

Cook and Morton in their Penguin Guide rightly refer to Christy’s “sensuous voice” as “less an improviser’s vehicle than an instrument for long, controlled lines and the shading of a fine vibrato”. There’s just a couple of examples of scatting on these albums, which she didn’t favour. Her vibrato, and clear delivery, were major influences on cool-jazz vocal performance. Christy had a bigger and more conventionally beautiful voice than Billie Holiday. How listeners respond to timbre is partly subjective, though Christy’s seems to have wide appeal; what’s more objective is her artistry as an interpreter of a lyric.

Her adventurous choice of material was matched only by her contemporary, Peggy Lee. The best album here, both for material and arrangements, is the opening one arranged by Bob Cooper; some later Rugolo arrangements are Kentonesque in their grandiloquence, with inferior material.

The finest interpretation, I think, is They Can’t Take That Away From Me, which is rhythmically free and has some delightful melodic shifts. It’s doubtful that Holiday herself ever did anything better, certainly not on her own interpretation of that song, which is weighed down by a rather lugubrious arrangement; the same applies to Peggy Lee and her version. Other highlights include When Lights Are Low, and Blue Moon. It’s good to compare I’m Glad There Is You to Sarah Vaughan’s version with Clifford Brown.

After 1965 Christy made only occasional appearances, as alcoholism took its toll; she died in 1990.

Discography
CD1: Rock Me To Sleep; The Gypsy In My Soul; I’m Glad There Is You; They Can’t Take That Away From Me; It Don’t Mean A Thing (If It Ain’t Got That Swing); My One And Only Love; When Lights Are Low; I Can Make You Love Me (If You Let Me); Easy Living; Blue Moon; All God’s Chillun Got Rhythm; My Heart Belongs Only To You; Whee Baby; You Took Advantage Of Me; Get Happy; Look Out Up There; Great Scot; Kicks; Why Do You Have To Go Home; Bei Mir Bist Du Schon; Until The Real Thing Comes Along; I’ll Remember April; I Never Wanna Look Into Those Eyes Again; Spring Can Really Hang You Up The Most; The One I Love (Belongs To Somebody Else); Nobody’s Heart; My Shining Hour; I Remember You (79.42)
CD2: Night Time Was My Mother; I Wished On The Moon; The Song Is You; As Long As I Live; Saturday’s Children; Just A-Sittin’ And A-Rockin; A Hundred Years From Today; The Lonesome Road; She’s Funny That Way; It’s A Pity To Say Goodnight; Willow Weep For Me; Easy Street; Across The Alley From The Alamo; Come Rain Or Come Shine; How High The Moon; Remind Me; Out Of This World; You Wear Love So Well; Off Beat; The Bad And The Beautiful; Who Cares About April?; You Say You Care; Out Of The Shadows; A Sleepin’ Bee; Somewhere If Not In Heaven (81.59)
Selected personnel, collectively: Shorty Rogers, Pete Candoli (t); Frank Rosolino (tb); John Graas (frh); Bob Cooper (ts, o); Bud Shank (as, ts, f); Russ Freeman (p); Jim Hall, Laurindo Almeida (g); Red Callender, Red Mitchell, Joe Mondragon (b); Stan Levey, Mel Lewis, Shelly Manne (d). Los Angeles, 1958-60.
Avid AMSC1392

John White - 04 July 2021
This reissue of two of the best 1958 sessions - Blues-A-Plenty and Not So Dukish – recorded by Johnny Hodges and his mainly Ellingtonian contemporaries for the Verve label...