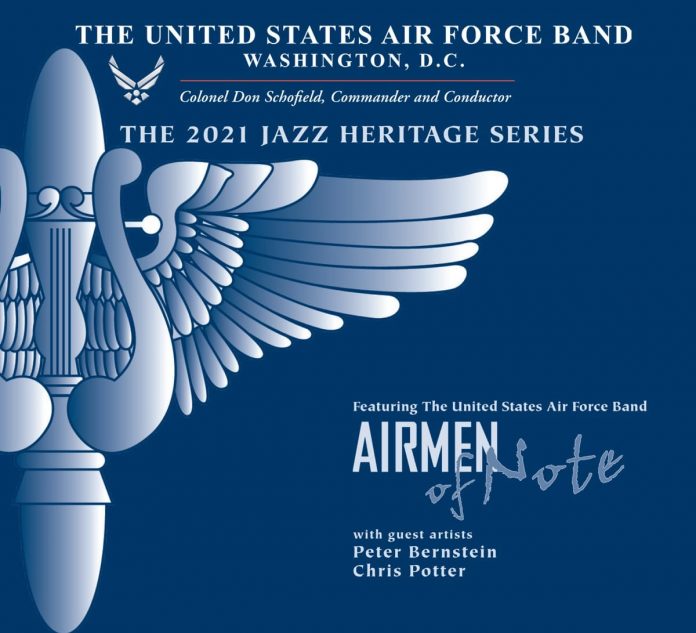 Seventy years ago, the United States Air Force formed a big band named Airmen of Note, although there is nothing dated in what is heard from this latest incarnation. Far from it, as this is contemporary big band music of the highest quality and throughout this live gig the music constantly sparks with energy.

Powerful ensemble playing from the brass and reed sections provides excellent support for the soloists, all driven by the strong rhythm section. Tempos selected are mostly relaxed and smoothly swinging, stepping up a gear for Means And Ends and Exclamation.

As expected, the bulk of the solos heard at this concert are taken by the guests, guitarist Peter Bernstein and tenor saxophonist Chris Potter, both of whom are in fine form. Not only do they play with flair and inventiveness, their writing talents are also on display, with two compositions by Bernstein and four by Potter. The guests are not the only soloists as several band members feature with well-taken solos, among them trombonists Kevin Cerovich and Ben Patterson, saxophonists Mike Cemprola and Tedd Baker and pianist Chris Ziemba.

In recent years, much contemporary big band music in America has flourished in colleges and universities and to these sources must be added the US military, not only the Airmen of Note but also the Army Blues Band and the Marines’ Commodores. In passing, the listed personnel includes vocalist Paige Wroble, presumably heard at the concert but not on any of these tracks.

This very enjoyable big band session should have wide appeal. Although reviewed as a CD, the music is apparently unavailable to the general public in this format. It can however be freely accessed online and downloaded – apparently at https://www.music.af.mil/Bands/The-United-States-Air-Force-Band/Ensembles/Airmen-of-Note/ though the editor spent five minutes trying to find it and gave up.

Brian Morton - 22 June 2020
Anders Filipsen is probably better described as a sound-artist rather than as a musician. There has always been a strong audio-visual component to his work whether with The White...