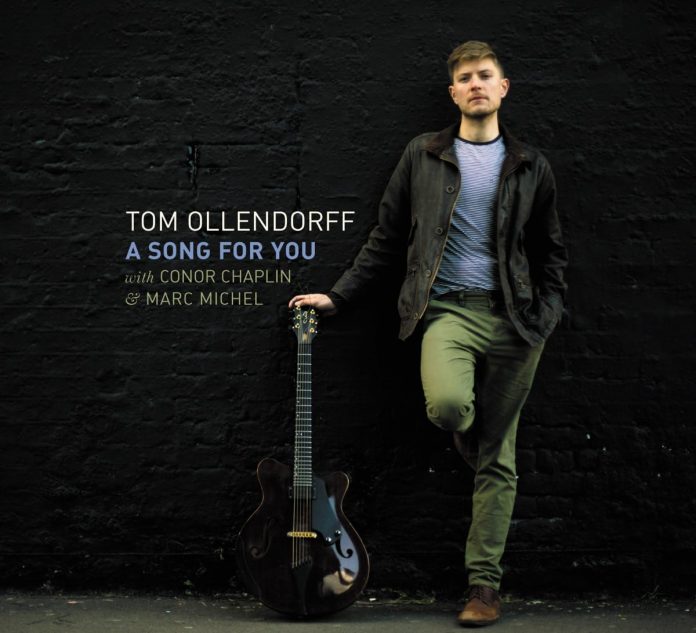 Having won the 2015 Yamaha scholarship for Outstanding Jazz Musicianship, Tom Ollendorff has since toured the UK and European jazz circuits with such illustrious names as Geoff Simkins, Dave Cliff, Huw Warren, Ari Hoenig and Or Baraket.

Lyon-born Michel graduated from the Royal Academy of Music, and has since toured and recorded with his own EYM Trio (which took first prize at the 2015 Jazz à la Défense festival) and worked with the likes of Chris Cheek, Gilad Hekselman, Sylvain Luc, Hadrien Feraud and Joe Locke.

The album’s overall tone is gentle and dreamy and is set by the opening title track, whose delicate guitar runs are accompanied by an understated rhythm section, with Chaplin and Michel shining briefly as individuals later on as things pick up. Spring takes a slower pace with whispering cymbals, neat drum fills and punctuating bass notes, while the paired Etudes 1 and 3, alternately bright and restful, introduce a classical mood.

An energetic change of tempo sees XY upping the ante in rhythm terms, with Chaplin and Michel working hard behind Ollendorff’s busy fretwork as well as taking spirited improvisational spots for themselves, while the American Songbook classic Autumn In New York, penned by Vernon Duke for the 1934 Broadway musical Thumbs Up! – the only non-Ollendorff composition here – is given a beautiful, mellow treatment.

As one would expect, Ollendorff’s tinkling guitar is all over this record, whether slow and ethereal or fast and fussy, with Chaplin and Michel providing steady, subtle support while also taking brief solo turns. What is good is that the improvisation isn’t overdone or overextended; the guitar lead dominates against a solid, disciplined backing, but also allows Chaplin and Michel’s rhythm section to make its presence felt without outstaying its welcome. A superb debut from a bright new talent.

Elliot Marlow-Stevens - 31 March 2021
Patrick Bradley releases his fifth album, Exhale, and as the liner notes explain, he draws inspiration from his religious beliefs as well as looking to find some musical respite...