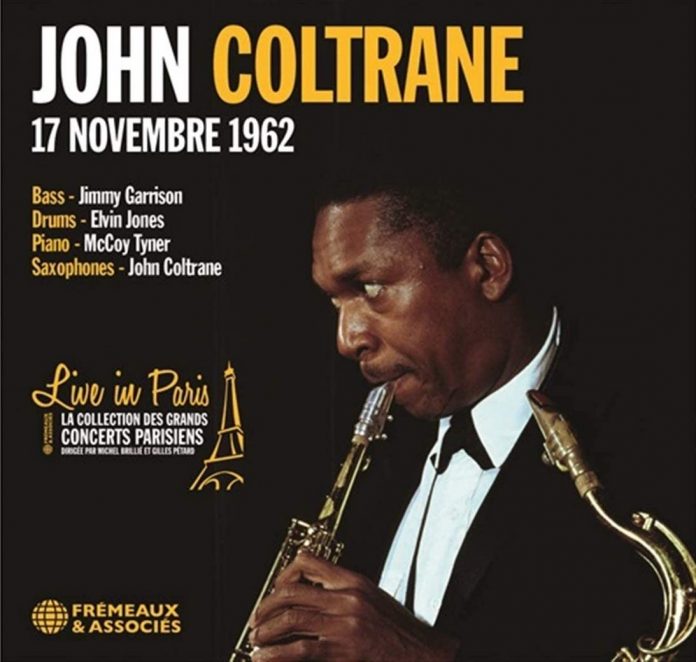 This album provides almost 70 minutes of John Coltrane’s classic quartet performing in Paris’s Olympia Hall in 1962. Coltrane was on his third European tour and had played at the Olympia twice before. The first time, when appearing with Miles Davis in 1960, he’d received a poor reception and was booed by the audience. In 1961 when he returned with his own quartet plus Eric Dolphy, reception from a noisy part of the theatre wasn’t much better. However, it seems that persistence eventually won through because in 1962 there wasn’t an empty seat in the house and the audience was adulatory. Coltrane had become hot stuff.

Norman Granz introduces the band to loud cheers. Then we have four numbers from the two sets performed that night. Two of these are Coltrane originals, one is a jazz standard and the last one a show tune from the The Sound Of Music. Coltrane doesn’t introduce any of them – he never spoke much on stage.

The first track is Mr PC, the fast-paced number named after Coltrane’s friend and bassist of choice Paul Chambers. It had first appeared on Giant Steps in 1960. Next is a soulful delivery of Cole Porter’s Everytime We Say Goodbye which had been been released in March 1961 on My Favorite Things. It’s followed by Impressions, the other Coltrane original here. This modal post-bop number with its extended jams was new to the Olympia’s audience at the time as although recorded in 1961 it wasn’t released until Impressions came out in 1963. The last track is Coltrane’s corybantic version of Rodgers and Hammerstein’s My Favorite Things. This number and the aforementioned Everytime We Say Goodbye were the first to feature Coltrane playing soprano sax. The album on which they appeared had popularised modal jazz almost as much as Kind Of Blue and its title track had become a hit single.

Frémeaux tells us that the live takes here haven’t been released before. The 1979 Pablo LP, The Paris Concert, does have two of the same numbers but it’s disputed as to when and where those were actually recorded. The content of the Frémeaux tapes has been restored to meet CD standards and the resulting sound quality is near perfect. Some readers may well have the related studio albums but as a time capsule of Coltrane’s classic band in action you can’t get much better than this live performance.