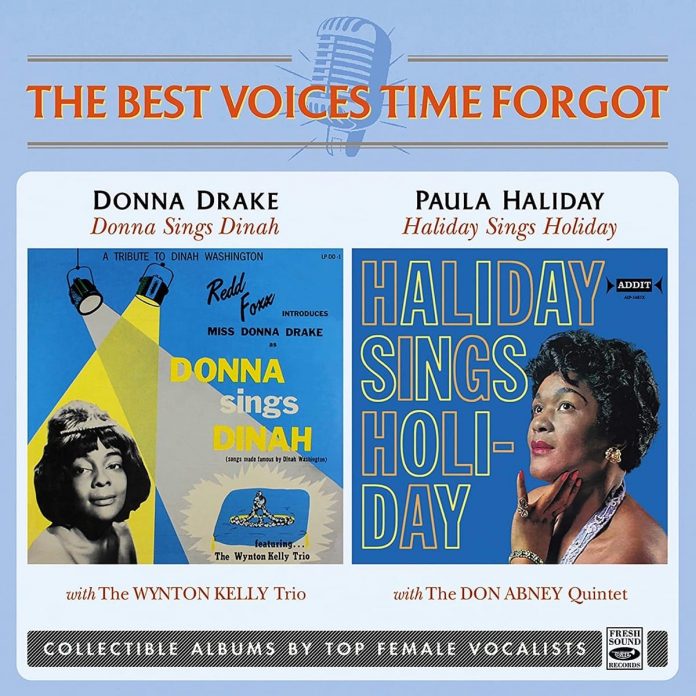 Puzzling a while ago about why all the rather good singers in Fresh Sound’s Voices Time Forgot series disappeared from view, I put it down to the rise and uproar of rock ’n’ roll. These two recent examples though may give another clue and that clue is in the titles. Both had especially good voices and the ability to put songs across effectively, but both chose to lose part of their identities by focusing on the achievements of other vocalists.

First up we have nine titles by Ms Drake in a passable imitation of Dinah Washington. She is good and uses many of the vocal inflections used by Dinah but maybe should have tried to develop her own style and method of delivery. Donna shines particularly on the blues, with Evil Girl Blues being the best example here. She was also particularly good on ballads, never Ms Washington’s speciality.

Maybe concentrating on her strengths would have propelled Ms D on to further success but this 28-minute recital was her only issued record. She is well served by that ideal accompanist Wynton Kelly and his trio, with Keter Betts coming in on bass for regular Paul Chambers who was probably too ill by this time to take part. He died a few months later, in 1969.

Paula Haliday also knew how to use the inflections and note-stretching techniques of her favourite, Billie Holiday. She sounded best though, I feel, on ballads like But Beautiful and medium-tempo swingers like Love Me Or Leave Me. She too is well supported by a swinging sextet led by pianist Don Abney but none of the others are listed. Her versions of God Bless The Child and Gloomy Sunday are extremely good, but she does rely a little too heavily on trying to duplicate the Holiday style.

Ms Haliday too only made this one record but on the aural evidence here both singers deserved to be recorded much more.

Matthew Wright - 22 May 2021
Guitarist Michael Gregory Jackson has a highly regarded reputation amongst guitarists, though mainly from the freer end of the spectrum. Starting out in New York’s loft scene of the 1970s, he...