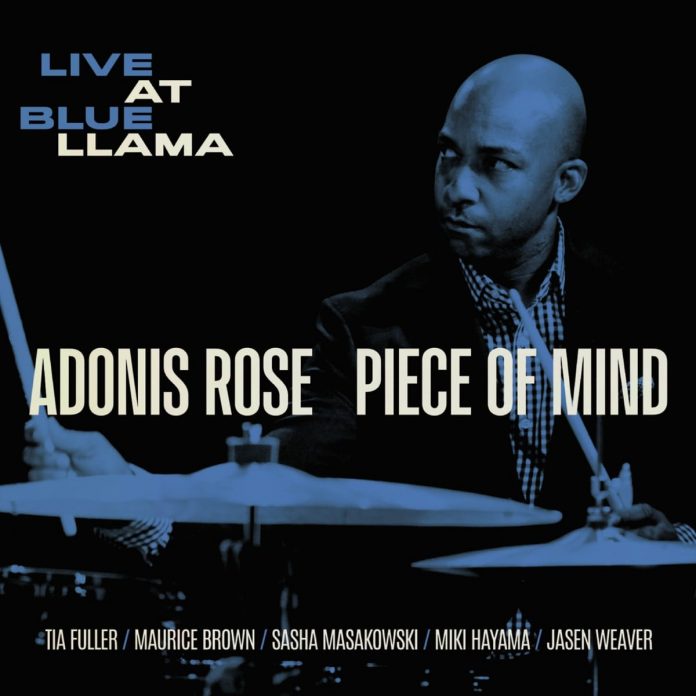 Drummer Adonis Rose did his first live recording in the Blue Llama club in Ann Arbor in the early summer for release in the autumn of 2020. The music may remind listeners of the bop and fusion days of the 1970s and indeed, as I discovered later, Rose’s inspiration for this band was the VSOP group of the period, which featured Freddie Hubbard and other notable soloists. The use of electric piano and bass, I thought, gave it that period feel.

He gives us a piece of his mind right enough, kicking off with the churning, bristling opening track Keep Your Soul Together. Hubbard wrote this and it will remind many of his style of writing and playing in the 70s when he was still playing bright, brassy trumpet along with some fusion licks. Much the same can be said of Maurice Brown, the trumpet player here, who has a big sound and can play tricky, complex lines when it suits him. Tia Fuller is also impressive, with a burgeoning alto sound, although she can and does play soft focus lyrical solos on ballads such as on Nostalgic Impressions.

Lovely is another light focus melody where Tia’s solo is sweetened and controlled to suit the mood. Not for her the Jackie McLean dictum “I’m a sugar-free saxophone.” But listen to her rip it up on Sunny Side and the 14-minute Blue Llama Jam where she and her colleagues turn up the hard sound and play through with a touch of fusion and even an occasional roar into free or avant-garde territory. These last two show how the band can swing hard and produce fascinating, quite aggressive solos.

Maurice’s Rap gives Brown the opportunity to exercise his chops as a rapper and it’s neatly integrated into a fusion beat.

Another player here with some inventive solos and a tough but effective style is pianist Miki Hayama, whose drive and thrust through these tracks is impressive. She too can vary the approach according to the requirements of the music and together, these six musicians mix together very impressively. Sasha Masakowski sings on two tracks in bright fashion.

Last but not least leader Adonis Rose keeps everything flowing with some brisk, driving drumming. You can sense and sometimes even hear him pulling all the music together and shaping it the way he wants it.

Brian Morton - 16 October 2020
Until Mahalia Jackson came along, Rosetta Tharpe was the voice of gospel, though some of the black churches shunned her after she played in nightclubs. She’d started out, pre-school,...

Pepper And The Jellies: The Stuff Is Here