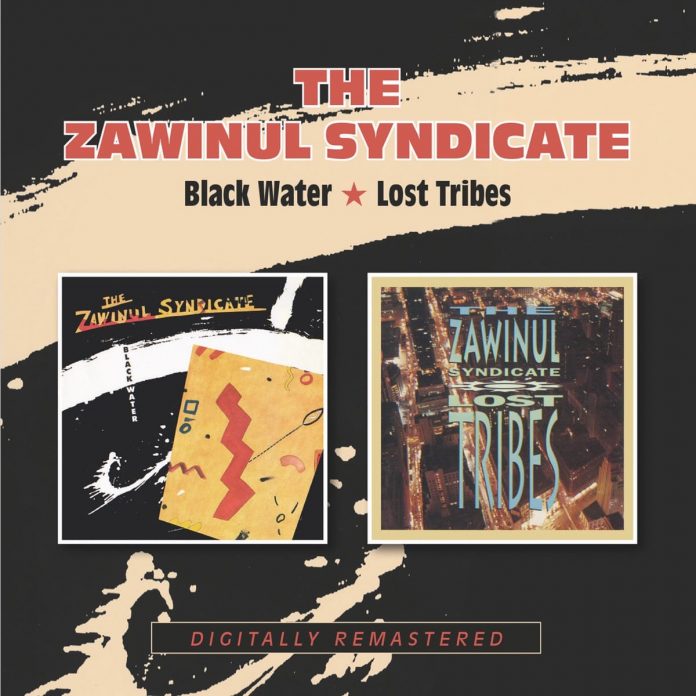 In mood, style, sound and instrumentation (but see Henderson below) the Zawinul Syndicate sounded a lot like an extension of Weather Report. The “ethnic” and funk grooves are there along with Zawinul’s crafty playing and arranging, but it arguably lacks the memorable themes that distinguished the earlier band. More worryingly, the inclusion of Veasley’s ebullient vocal exhortations in parts of Black Water make it on occasions dangerously redolent of a Temptations concert, but musical quality thankfully soon supervenes. For example, Familial might at first sound like a shapeless one-chord jam but Zawinul’s creativity becomes palpable in the ingenious layering of melody and texture.

As noted, the main departure was the arrival in 1988 (for Black Water‘s predecessor The Immigrants) of guitarist Scott Henderson, not so much for his contributions to the ensemble sound, the electric guitar sonically not that far from the keyboard, but for his solos. He adds bluesy chromaticism to a mix that otherwise relies on Zawinul’s distinctive way with the pentatonic and the bebop lexicon. On Black Water Henderson’s in unison with Zawinul’s accordion on Medicine Man (ignore Veasley’s vocal interruptions, an evident lunge at a wider audience) before taking off on a typically spectacular solo flight. He has another fiery one on In The Same Boat, showing that bebop-friendly fusion guitar had conclusively arrived. The two Monk tunes have suspect, possibly even rather cheesy synth arrangements but when the synth falls away on Little Rootie Tootie Scott Henderson breaks out magnificently into the clearing over a swinging piano trio, blending bebop and biting blues tones to great effect.

Zawinul told me Henderson was too loud. He’s conservatively mixed on Black Water, but in any event he wasn’t around for the second album featured here, the 1992 Lost Tribes. Then, the strangely anonymous Randy Bernsen – not much of a soloist, more ensemble colour – took over. Could Zawinul have felt upstaged by Henderson? Consequently Lost Tribes, following the same style as Black Water, lacked a strong soloist beyond Zawinul. Of course, Weather Report was more about ensemble improvisation than solo stars and that quality prevails here, Zawinul’s arranging genius undiminished. The merest concepts – a mbaqanga groove on South Africa, a modal vocoder evocation of ancient unidentified tribes on the title track – are transformed into deceptively complex compositions in Zawinul’s hands. One oddity is titling Veasley’s take on flamenco after San Sebastian, a city diametrically opposite, geographically and culturally, to the cradle of the music 1000 kilometres south in Andalucía. We don’t know if Changes, the title of the closing track, is meant to be philosophical or musically descriptive, but the latter perception fits well as Zawinul gets deeply chromatic, recalling Monk, on piano (maybe an electric grand) over a vigorous groove that darts from chord to chord, a song of changes indeed.

Thanks are due to the exacting Beat Goes On for a well-packaged two-CD collection including a booklet with copious discography and a useful background essay. By this time the critical establishment was largely ready to dismiss Zawinul but familiar as the style had become, attention to what’s actually being played shows his application and resourcefulness were undiminished.

Steve Voce - 17 June 2020
It seems like caving in to use the title of the French hit for a classic collection of Sidney’s, for that’s what this is, and nothing to do with...