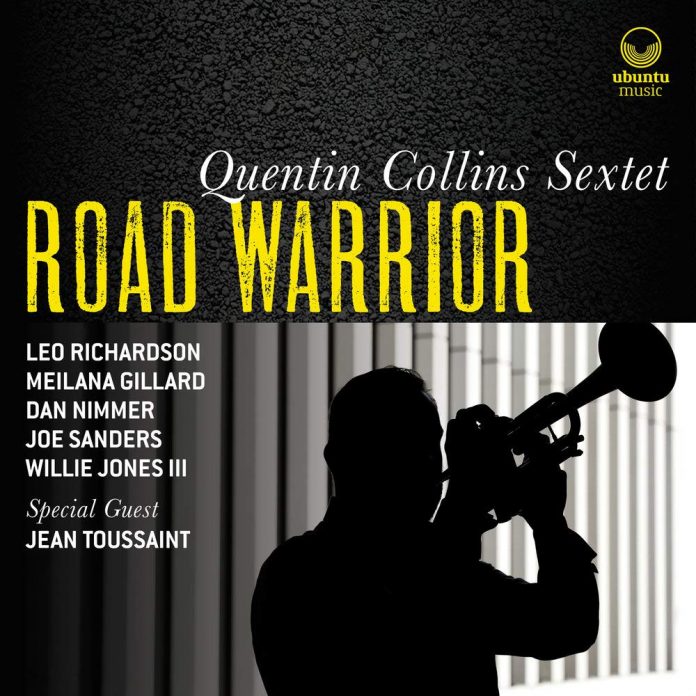 Surprisingly, this is only the second album that Quentin Collins has recorded under his own name since his debut CD 12 years ago. In the meantime he’s recorded a couple with his and Brandon Allen’s quartet and four with Kyle Eastwood’s band with which he’s toured the world.

Apart from one standard, all the numbers here were penned by either Collins or saxophonist Tom Harrison and broadly reflect the lives of touring musicians. The UK horn section has Collins on trumpet and flugelhorn, Leo Richardson on tenor and Belfast born but New York based Meilana Gillard on alto. She was drafted in at short notice after Harrison was unable to make the recording due to injury. They combine with the American rhythm section of pianist Dan Nimmer, bassist Joe Sanders and Willie Jones III on drums. Jean Toussaint, the album’s producer, also guests on tenor on two of the tracks.

The album is a vibrant mix of contemporary straightahead jazz and hard bop in the Messengers mode. The title track has adroit Silver type piano from Nimmer, commanding Richardson tenor and foot-tapping bass and drums. Float Flitter Flutter evokes Snorre Kirk’s dreamy horn harmonies and has superb soloing from Gillard with sleek, walking bass. Do You Know The Way? showcases Collins’s Hubbard-style articulacy, energetic tenor, intricate piano and all guns blazing drums. Look Ahead (What Do You See?), written for Collins’s 10-year-old son, is mellow and features Nimmer on Rhodes and Collins on flugelhorn.

Jasmine Breeze is marred by two grating trumpet notes repeated at regular intervals throughout. The song is a fine piece without these intrusions especially with Toussaint being on top form here. The Hill has inventive piano and wordless vocals from Sanders. El Farolito is energetic, with Latin flavours, urgent alto and explosive drum work. Wider Horizons is melodic with flugelhorn, rhapsodic piano and plaintive tenor. Oh! Look At Me Now, made popular by Sinatra in the 40s, has Sanders and Jones swinging hard with excellent solos from Collins, Gillard and Richardson.

This is creative ensemble playing of the highest order. It sparkles with energy and has highly impressive soloing from musicians at the top of their game. More on Quentin Collins at quentincollinsmusic.com