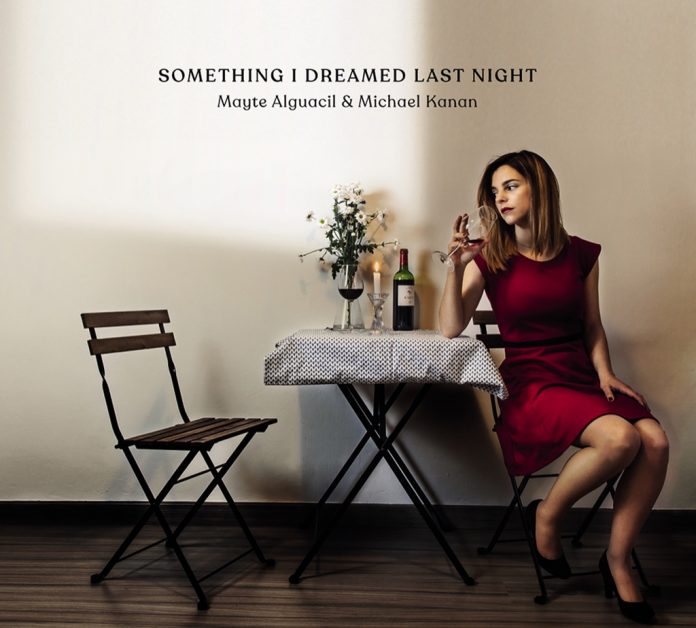 Spanish singer Mayte Alguacil is probably a new name to most of us, despite her two previous Fresh Sound sets, while American pianist Michael Kanan will be familiar for his work with Jimmy Scott and Jane Monheit, as well as for his sensitive accompaniment on altoist Sam Braysher’s fine 2017 Fresh Sound debut, Golden Earrings, and for his own duo sets with altoist Nathanael Stu. Alguacil and Kanan have previously recorded together for Fresh Sound in 2015 on Day By Day, and continue here with the same mixture of standards and popular songs as on that set.

Drummer Jordi Rossi gets this set spot on when he writes in the sleeve notes that “Mike and Mayte have no interest in over-dramatic expression, extravagance, ready-made emotion or artifice of any kind”. Neither are they interested in anything faster than a slow stroll, as none of the 13 tracks ever picks up its feet and attempts to dance. Every Time We Say Goodbye is so slow it almost grinds to a halt, We’ll Be Together Again is positively lethargic, while the album’s stand-out track – In The Wee Small Hours – is stripped down to bare vocals and single-note piano support.

But if the two don’t go for drama, they are interested in exploring the emotions of each song, Mayte inhabiting the lyrics as if she wrote them, Michael’s sensitive, withdrawn accompaniment – he only takes brief solos – providing the melodic backdrop with the minimum of harmonic variety. On Harold Arlen’s Ill Wind, Mayte channels the inner Billie Holiday, rough edges and all, but mostly she sticks to pure tone and precise diction. It’s all very languid, all very simple, and all the more effective for that.

Discography
Guess I’ll Hang Out My Tears To Dry; Every Time We Say Goodbye; Last Night When We Were Young; There’s No You; I‘ll Never Be The Same; In The Wee Small Hours Of The Morning/Ungrateful Heart; Ill Wind; Something I Dreamed Last Night; Only The Lonely; Some Other Spring; Who Can I Turn To?; We’ll Be Together Again; By Myself (55.49)
Alguacil (v), Kanan (p). Barcelona, 5-6 February 2019.
Fresh Sound New Talent FSNT 591

Simon Adams - 02 January 2022
Japanese pianist Ayumi Tanaka first met her trio shortly after she arrived in Oslo some 10 years ago. Since then, the three have developed a musical language together, exploring...