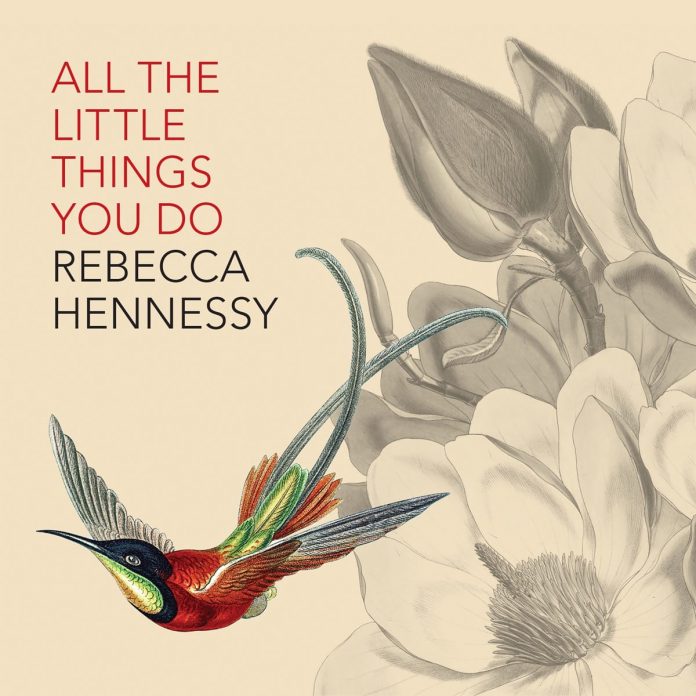 An award-winning Canadian trumpet player, Rebecca Hennessey also sings and, as demonstrated here, writes songs. On this release, it is her singing and writing that takes precedence, although her occasional trumpet solos are very effective.

In addition to their instrumental roles, the others in the band provide individual backing vocals, as do arrangers Claire Doyle and Alex Samaras. Other arrangers are Tom Richards, who also plays trombone and Drew Jurecka, who plays violin and viola. Another arranger involved is Thomas Dooley III, whose work is heard here when Hennessey is joined by the Upper York Mandolin Orchestra on All The Little Things You Do and Deeper Than The Dark Blue Sea.

As composer and lyricist, Hennessy is credited alone for two songs and also in collaboration with Julia Hambleton (two songs), Dave Clark (two) and Michael Herring (five). The remaining two songs, Dig Up The Stories and Nothing Passes For Favour, are Hennessey’s settings for poems by Thomas King, the second of which opens with a brief narration by the poet.

Hennessey’s singing voice is gentle and there is a wistful air surrounding most of the songs, portraying as they do moments of often sad significance in her life. That said, the emotions expressed by the gently reflective writing and singing reflect experiences to which most listeners can relate.

Discography
All The Little Things You Do; Magnolia; Loving You; Deeper Than The Dark Blue Sea; Keep The Light Bright; There’s One Thing; Dr. Good; Eclipse; It’s A Beautiful Day To Say Goodbye; Dig Up The Stories; When Stars Shine Bright; Nothing Passes For Favour; When You Say Goodnight To Me (63.01)
Hennessey (v, t); Kevin Bright (o, md); Tania Gill (p); Michael Herring (b); Dave Clark (d). Toronto, 2020.
rebeccahennessy.com

Elliot Marlow-Stevens - 17 May 2022
LA-based experimental collective High Pulp release their latest album, Pursuit Of Ends, a complex and contemporary jazz recording. Having formed through a regular jam session in Seattle, the ensemble...