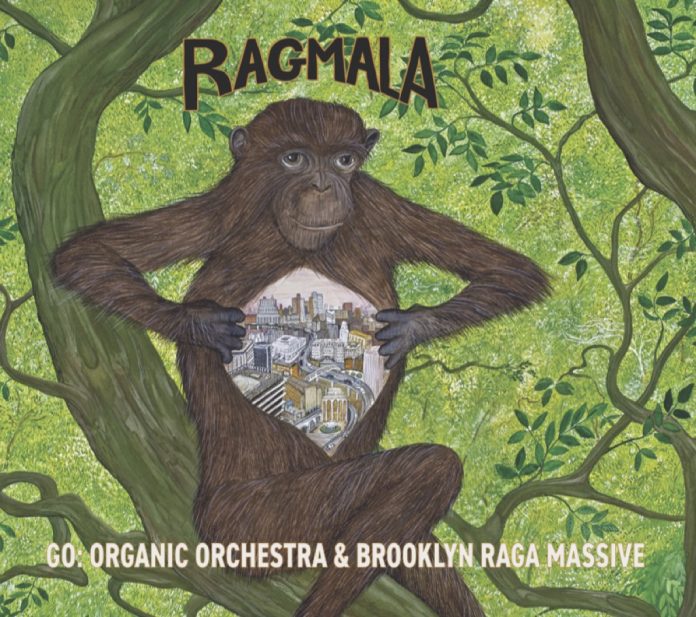 This is a big band and a half. Well, actually it’s two. Ragmala. A Garland Of Ragas is the result of an amalgamation between a pair of remarkably empathetic New York based outfits. Go: Organic Orchestra is led by percussionist, conductor and composer Adam Rudolph, who regards his ensemble as personifying how a “future orchestra” would look. That term was coined by former Miles Davis colleague Bennie Maupin, an early member of Rudolph’s orchestra.

The other cooperating band here is the Brooklyn Raga Massive (or BRM as they are also known), an accurately self-descriptive moniker given that it comprises mainly, but not exclusively, Indian-American musicians. However, the music they produce is not bound by territories or cultures. Rather, it employs the traditions of Indian music to create new and imaginative Raga-inspired soundscapes. Their interpretation of Terry Riley’s In C (Northern Spy, 2017) is just one extraordinary example of their art.

Despite a clutch of albums under the aegis of the Go: Organic Orchestra, both Rudolph and the orchestra remain relatively unknown to a wider audience. Rudolph’s previous albums such as Thought Forms (Meta, 2008) or Can You Imagine…The Sound Of Dream (Meta, 2011) are stylistically wide ranging, frequently channelling George Russell, Sun Ra or even Béla Bartók.

This obscurity could be rather a shock since the music on this double CD is remarkable, haunting and compelling. Whilst the BRM’s recorded output isn’t as prolific as that of Rudolph’s orchestra, the quality of these records remains consistently high and emotionally gripping; listen for example to the BRM’s Coltrane Raga Tribute (Brooklyn Raga Massive, 2017)

Combined with the droning sitars, tablas and violins, electronic keyboards and bass guitar vie for attention, as heard on say Rotations which evokes both Miles Davis’s In A Silent Way (Columbia, 1969) and Bitches Brew (Columbia, 1970). Dialectic, by contrast, recalls shades of Davis’s On The Corner (Columbia, 1972). Alternatively, the modal, infectious groove of Turiya contrasts with the stark abstraction of Syntactic Journey.

Granted, this is not the first album to combine Indian classical music and its concomitant plethora of (to Westerners) esoteric instrumentation. However, records by John Mayer and Joe Harriott’s Indo-Jazz Fusions and Indian guitarist Amancio D’Silva were, by comparison with this album, fairly uncomplicated (although still brilliant). A more contemporary example might be Sarathy Korwar’s My East Is Your West (Gearbox, 2018) but that was punctuated by some covers, albeit excellent ones. Here, Ragmala presents the listener with two hours of Rudolph’s totally original compositions “improvisationally” (or should that be “inspirationally”?) conducted by him.